Beware the Wrath of Kasia

Yesterday being the first day after the end of school, I took Kasia to the park. She chose to go to her school playground, having outgrown the baby swings at our local park and presumably missing the school playground already. Unfortunately, when we arrived, this is what we found: 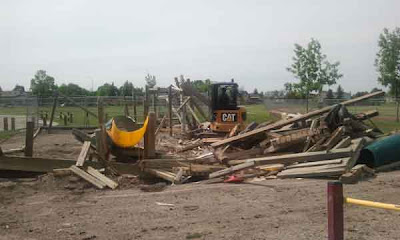 Kasia was not amused. She couldn't believe the vandalism she was seeing, even though she known for sometime that the old playground had been slated for demolition and replacement with a more modern one. To her, the existing wooden playground was a magical place, not only for her and her grade 1 peers, but for her older sister, Tigana, who had spent 5 years at this school ahead of her.

So Kasia started complaining bitterly, while I tried to calm and reassure her that there would soon be a brand new playground in its place. But Kasia was having none of that and started screaming, "I hate them, I hate them!"

I tried to suggest that what she meant was she hated the necessity of tearing down her old and familiar playground, but that 'hate' was a very strong word that should only be directed against people one something bad to happen to.
Kasia's face turned red, and she exploded at me: "No, Dad! I literally hate them!" and I could feel Kasia's anger projecting out and forming this metaphoric black cloud above our heads.

It was kind of freaky seeing the intensity of Kasia's emotion, the blast of pure malevolence aimed at the hapless demolition workers. And a Harlan Ellison short story -- wherein the protagonist gets so obsessively pissed that the negative karma focused on the target effectively curses the object of his hatred -- flashed across my mind. 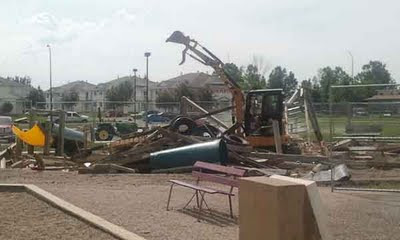 And as I am thinking Kasia's hate looks very much like that kind of elemental force, I hear a crash from behind me, and turn to see that the rear window of the Caterpillar tractor working on the demolition has been smashed in. The driver stops, gets out to survey the damage, and then grabs a two by four from the park wreckage to smash out the remaining shards -- dangerous, scary pieces of glass waiting to stab the operator in the back, where he not to finish the job of destroying the window. 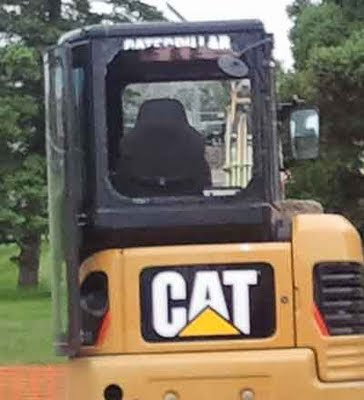 You can just make out the top half of 'Caterpillar" brand name on the rear of the tractor, the bottom half having been written on the now missing glass.

When I turned around again, Kasia had calmed down considerably; she was now merely muttering about the waste of lumber and her annoyance that they weren't even recycling the wood to make another park somewhere else...her usual green rant. But um....bolt of psychic energy, definitely dissipated.

The next day, they had posted the plans for the new playground (above), but I have to agree with Kasia that I don't immediately see how the new one is an improvement. The old one was wood, which is kind of nifto in and of itself, and had lots of places to hide and to contest the high ground, and so on, whereas the new one seems to be entirely see-through. But perhaps that's the point from a playground supervision/safety pov. Anyway, we'll see what Kasia thinks when the new one is completed in late August (just in time for start of the new school year).

But forget about the playground. When I got home, I took Tigana aside and said, "Word to the wise: don't ever really, I mean really, piss off your little sister, okay?"
Posted by Robert Runté at Thursday, June 30, 2011 No comments: Links to this post 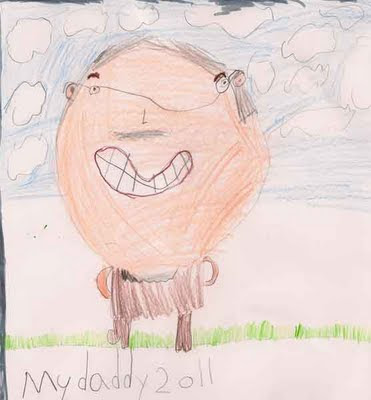 Kasia's portrait of me for Father's day. Not sure if the lack of beard reflects her forgetting I had one or just that beards are hard to draw. Line across my forehead represents glasses, and two extra eyes are ears. Careful examination reveals my bald spot.
Posted by Robert Runté at Friday, June 17, 2011 No comments: Links to this post