The magazine I review for, NeoOpsis won an Aurora for "Best Work in English, Other" earlier this week. The Auroras are for best Canadian SF.

Posted by Robert Runté at Wednesday, October 31, 2007 No comments: 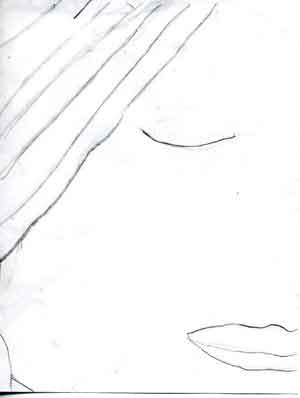 Below: Three other fall art projects: 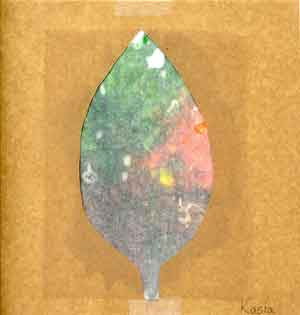 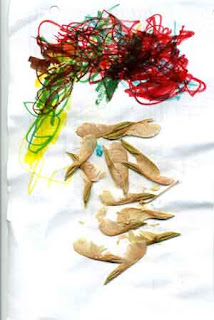 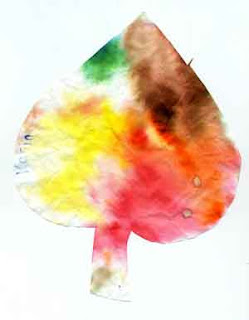 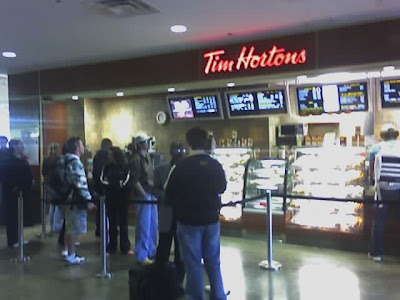 I have to walk through the new Wellness Center at the University of Lethbridge each day to reach my office, while construction of the new Education tower is itself completed -- we currently only have access through the rear door while they finish the front entrance and atrium.

So my question is this: Who puts a Tim Horton's outlet in a Wellness Center? We just spent x millions of dollars to build a facility with the province's biggest climbing wall, an indoor track, weight rooms, gyms, and a ton of exercise equipment, and then put a donut shop next to the exit so people using the facility can grab a few calories on the way out?

What am I missing here?

Email ThisBlogThis!Share to TwitterShare to FacebookShare to Pinterest
Labels: UofL

But it and the millions of other videos like it raise an important pedagogical point: In her fabulous paper, "Conflicting Cultures: Promoting Academic Integrity to the Millennial Generation" Selinda A. Berg (University of Western Ontario) makes the telling point that the millennial generation is surrounded by examples (like the above) of the creative mashup -- people take images and sounds from various other peoples' original works, and creates something new. Although these mashups clearly violate the originators copyright, they are considered (by the millennial generation) as original compositions. So then these same kids come to campus and are told that their original compositions -- consisting of paragraphs put together from 15 different articles and books -- is plagiarism and they're going to face this or that draconian punishment. Berg asks how academia can simply ignore that these students are not entering university blank slates ready for the professoriate to write on, but fully acculturated adults -- whose culture says that mashups are the norm and admirable?

Matthew Hughes and the Archonate

Having recently hosted a virtual book tour here, I thought I'd participate in another book promotion, this time by one of my favorite Canadian SF authors, Matthew Hughes.

Hughes first SF book (I'm still looking for a copy of his first ever book, Downshift, which was a mystery) was Fools Errant. I picked it up out of my self-imposed duty to read every Canadian Sf ever written, but immedately fell in love with his writing. Fools Errant is a highly entertaining novel of the far future when the sun is slowly diming and the humanity has largely been everywhere and tried everything and those left on Earth are suffering a kind of drole enui. In this, the first of the novels set in the Archonate, we follow the adventures of one Filidor Vesh, a rather fopish young gentlemen press ganged into an adventure that in spite of his initiall shallowness, causes Vesh to rise to the occasion and well, turn out to be a decent enough fellow after all. The adventures were continued to good effect in the sequel, Fool Me Twice

Practically every reviewer on Earth has compared Hughes to author Jack Vance, and his Archonate series to Vances "Dying Earth". Well, okay, I do kind of get that; it does fit. But the comparison that first came to my mind was not Vance, but H.H.Munro, better known by his pen name, Saki. Any one of Munro's macabre Edwardian protangonists would have found themselves very much at home in the Archonate. Think of Saki's continuing characters, Clovis Sangrail or Reginald, and you pretty much have everything by Matthew Hughes.

Let me give you a quick for instance. In this opening scene from Fools Errant Filidor is trying to slip out the back door of his club to avoid receiving a summons:

"I believe you to be Filidor Vesh," said the dwarf.

"You are entitled to your beliefs, however ill-founded," Filidor replied. "No doubt you will wish to search further for this Vesh, rather than impose your presence upon a man called hence by urgent affairs."

The dwarf transferred his grip from Filidor's mantle to his arm. His gaze swept quickly over the young man's features. "This belief is supported by the evidence, since you answer to a point the description furnished me."

"You are plainly the dupe of some prankster, who abuses the dignity of your years by sending you on a fool's errand," said Filidor. "Were I you, I would seek out the rascal and thrash him."

Who talks like this? (Besides Saki's sly young protagonists, Clovis and Reginald, I mean?) But wouldn't it be a much more interesting world if people did?

Both books are highly recommended, and were subsequently issued in the omnibus volume, Gullible's Travels
Next, I subscribed to Fantasy and Science Fiction Magazine, for the sole purpose of reading Hughes Guth Bandar novellettes. in which monk-like order of scholars explores the collective unconscious of humanity in its physical manifestation as "The Commons". Journeying through the Commons is both dangerous for our protangonist, and hilarious for the reader, as we encounter archtypes with which the reader is more familiar than our hero -- he wanders into the Big Bad Wolf and the Three Little Pigs at one point, for example, but in the adult-what-our-subsconscious-really-meant-by-it-all kind of way. Very good stuff! (The complete Guth Bandar saga in novel form, The commons is forthcoming from Robert J. Sawyer books later this month!).

Hughes next novel, Black Brillion, was a bit of a cross over, with some of the ideas from the Commons entering the world of the Archonate, but it worked pretty well. Here we meet for the first time in book form, Luff Imbry is your basic master criminal/con man, pressed into serving the forces of the law, at least temporarily.

Hughes other series concerns his master detective, Henghis Hapthorn. A number of Henghis Hapthorn stories first appeared in Fantasy and Science Fiction Magazine, and were subsequently collected as "The Gist Hunter & Other Stories", It too is set within the Archonate, but with the difference that magic is intruding into their world, disrupting the rationale causation that is the basis of Henghis' investigations. Think Conan Doyle's Sherlock Holmes set in Vance's Dying Earth, and you pretty much get the idea. But Hughes solves the eternal problem of how to have someone to explain the mystery to (i.e., his Watson character) through the unique approach that Henghis has a split personality with whom he argues his cases. The first novel, Majestrum concerns a plot against one of Earth's leading families; the second, Spirial Labyrinth, follows Henghis into a world dominated by magic. Both books are again, highly recommended, and are independent of the other series.

All in all, a Canadian author well worth checking out!

Here is a link to Hughes' website, the Archonate.com and a link to an audio of a CBC interview which captures his personality pretty accurately, from what I've seen from him online.
Posted by Robert Runté at Thursday, October 04, 2007 No comments: