I've signed up to teach a course at the UofL this summer: Ed 4321, Social Issues in Education. I've posted my course outline already, so that students taking the class in July can make suggestions now if they like. I've been teaching the course since 1991 but because it's an issues course, the specific content is different every year, and I've changed up the assignments to make them more manageable for a compressed summer course. Looking forward to a bit of teaching to break up my steady diet of editing and writing . . . I love working with authors and graduate students, but it's mostly solitary deskwork, so it will be good to away from the computer keyboard and actually interact with other people for a bit. My idea of a July holiday. . .

Reprinted from Rhonda Parrish's blog series And Another Thing: More about Candas Jane Dorsey each Friday in May related to the release of Prairie Starport: A Story Collection in Celebration of Candas Jane Dorsey

I confess when I was younger, I found Candas a somewhat intimidating figure.

She was, after all, courageously following her bliss to live the life of a writer; whereas I had cowardly chosen employment for which one might actually get paid. I greatly envied her freedom and personal fulfilment, as I toiled 9 to 5 in my government job.

I was astonished by her ability to sit down and write without angst, to produce in twenty minutes a document that would have taken me all day, had I been able to manage the task at all. She was and remains a model of efficiency and effective writing, concise and on target in every instance.

I greatly admired her intuitive leadership skills, among which was the ability to move others to action: anyone who fell into her orbit was likely to discover they had somehow volunteered to sit on Boards, or to organize readings, or to make cold calls for some cause, or to otherwise be doing things they would not, in the normal course of events, have thought of doing.

I was somewhat overawed at her weekly salons in which the artistic elite of Edmonton, and frequently the literary greats from beyond, would sit around her living room debating the nature of writing, the cost of tomatoes, and similar eternal verities. It was sobering to discover that writers were real, that there were more of them about than one would have imagined, and that one did not have to travel to Toronto or New York to meet them.

And, being somewhat socially awkward, I was frequently thankful for her frank advice on a variety of topics concerning how one should move through the world, such as pointing out on one memorable occasion, that my attempts not to disrupt the proceedings had been far more disruptive than the initial disruption.

It is possible that on occasion I allowed my better judgement to be overwhelmed by Candas’ unassuming charisma.

I recall one afternoon attending at her house and, having no response to the doorbell, took the initiative of going round the back to intrude upon the privacy of her garden. I found her sitting next the flower bed examining a bloom with flat, but colorful petals.

“Here, eat this,” Candas said, handing me the flower.

Internally, I dithered. On the one hand, this was well before my culinary horizons had expanded much beyond burgers, and food prejudices being among the most strongly held, I did not wish to eat a flower. On the other hand, I did not wish to appear unsophisticated, and I considered carefully that there was no logical reason not to eat the offering. After all, Candas was hardly going to hand me a dangerous herb or one which she did not routinely consume herself. As in so many other cases, I should follow her lead to experience new things and benefit from our fellowship. And, knowing Candas’ powers of persuasion, I recognized that I was going to eat the flower in the end, and the only real question was whether I would do so after my usual whimpering hesitation, or man up and eat the damn thing as if that were a perfectly natural thing to do.

I stuffed it in my mouth and chewed, hopefully before my hesitation was detected.

Candas watched me carefully. I refused to allow any of my consternation to show on my face.

“What kind of flower was it?” I inquired, once I had swallowed.

She named the variety, though in truth the knowing of it made me none the wiser.

“Well, I’ve always wondered what they tasted like, but I could never quite bring myself to eat one.”

“Would you describe the flavour as ‘delicate’? It’s for a scene I’m writing.”

I like to believe that this was an important turning point in my maturity. As with so many other occasions, Candas had introduced me to an important concept, in this case something about not giving into peer pressure, especially when the pressure was entirely in my own head.

Candas, of course, has always been mystified by any suggestion she is intimidating. She considers herself perfectly normal. Which, considering her accomplishments, is a pretty intimidating standard against which to be held.

My daughter, Kasia, just showed me this. I thought it was mildly amusing until hit the chorus, at which point laughed out loud. So sad, so true.
Posted by Robert Runté at Sunday, May 13, 2018 No comments:

Candas Jane Dorsey has been a driving force behind the literary scene in Alberta (particularly Edmonton) for over 40 years. As an award-winning author, editor, publisher, organizer, and activist, she has pushed to create a literary arts community as vital as any in the country. In tribute, a group of authors led by Rhonda Parrish have produced a tribute anthology: Praire Starport: Stories in Celebration of Candas Jane Dorsey. The volume is free from https://dl.bookfunnel.com/5sjui795et and includes one of my early short stories along with my brief tribute to Candas related to the story. 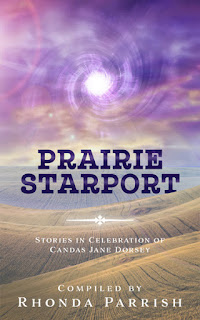 Here are the links for all the places people can get copies of Prairie Starport: