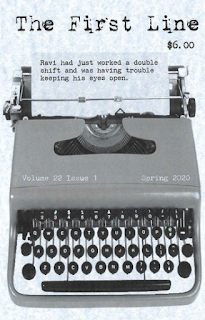 My story "Third Shift" came out today from The First Line Magazine. Yay!

I love the concept of The First Line, where all seven stories start with the same (assigned) line. (The magazine's tag line is, "It all starts the same, but...") Writing a story to one of their prompts is great because it takes you out of your usual mindset and forces you to mix things up a bit. This issue's opening line is "Ravi had just worked a double shift and was having trouble keeping his eyes open." The story just jumped into my head, essentially fully formed.

This is my second story in published in The First Line. They rejected one (which I sold elsewhere, having made only a minor change to the first line) and I've just now sent a fourth off to them, with my fingers crossed. So much fun.

They also publish The Last Line magazine, and Workers Write, all of which are worth a look.