The Luck of Charles Harcourt 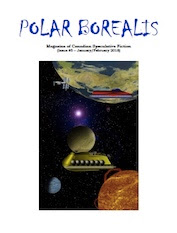 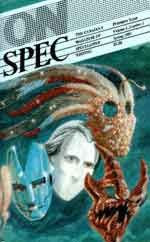 My 1989 short story, "The Luck of Charles Harcourt", has been reprinted in the current issue (#5) of Polar Borealis (above left). The timing pleases me greatly because the story originally appeared in the very first issue of On Spec magazine, and my second story in On Spec (above right) came out just last month (January, 2018) in #106 Vol. 28 (3), pp. 88-105 (see post from January 11). So there is an opportunity to compare first and last, as it were.

I must confess that reading my story from nearly thirty years ago makes me wince a little bit at the now obvious sexism, and it seems strange to read about people lining up at the bank tellers instead of using the ATM, and that there were no cell phones yet. I was tempted to update the story, but editor Graeme Cameron argued that "every story is a time capsule, capturing the context of the time it was written. Which is why I don't believe fiction should ever be reprinted with alterations designed to appease changing tastes and views. Let the past speak with the authentic voice of the past, I say."

It's an intriguing issue. Lorina and I left Hargreaves' stories as they were when Five Rivers reprinted North by 2000+ because they were authentically awesome, though the future he predicted for 2000 was not quite the one we got. In my preface, I told readers to just read the stories as if they took place in a parallel universe where American and Canada had merged (to take just one example of what hadn't gone the ways Hargreaves had predicted in the 1960s) but some readers did indeed complain about the anachronisms. Though it should be noted how many things Hargreaves got right, and therefore went unnoticed.... On the other hand, we updated Leslie Gadallah's books to take out the long explanations of the Internet, because we actually had the Internet by the time we reprinted her books. Perhaps the most interesting issue I've had as an editor with anachronisms is an author who wanted to disguise that the story was based on their own life by setting it in modern day, but then the action didn't make any sense, because much of the storyline depended on the confusion arising from characters not being able to reach each other, which just can't happen that way in an era of smartphones.

Anyway, pleased with to have the two stories out at once. Waiting to see if any of the five currently under consideration get picked up.

Note that although Polar Borealis is a paying market showcasing new and established Canadian authors, it is available free to subscribers: Download Now

Posted by Robert Runté at Thursday, February 08, 2018 No comments: