I have more than once called Matthew Hughes a national treasure, and regular Hughes fans won’t need me to urge them to pick up the latest collection set in the Archonate/Spray universe. Hughes is the Canadian/21st century Jack Vance, the oddly optimistic cynic, the seriously funny creator of a brilliantly original universe. This is the latest in the series which posits that the universe periodically swings between the fundamental principles of cause & effect and sympathetic association (magic). The book’s protagonist is Erm Kaslo, a top level confidential agent who suddenly finds that none of his skills are relevant when cause and effect no longer apply. As technology fails, civilization crashes, and powerful thaumaturges rise from the ashes, Kaslo falls in with one particular wizard as his henchman. If you are a fan of the Archonate or the adventures of Henghis Hapthorn, the collection of Erm Kaslo will be right up your alley.

I offer, however, two mild cautions: First. readers unfamiliar with the Archonate should start with another in the series, as the Kaslo stories are really the ultimate climax to everything else that has happened so far; better not to know how things end until you’ve read how they begin. But by all means, go find Fools Errant and enter the marvelous universe of the Acrhonate.

Regular Hughes fans may find that—as a collection of shorts/serialized novel (in Lightspeed magazine)—there is a certain amount of repetition as ‘chapters’ recap events in earlier ‘chapters’ because these were originally published separately. The repetition is only mildly distracting, however, and should not significantly detract from readers’ enjoyment.

Any time Hughes puts pen to paper is a reason to celebrate, and the Adventures of Erm Kaslo do not disappoint.

Posted by Robert Runté at Saturday, October 08, 2016 No comments: 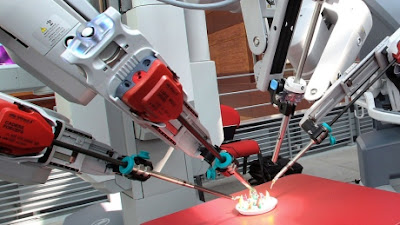 I can't say I was particularly pumped when doctor told me I needed major surgery—until he said, "Oh, and the surgery will be done by robot..."

"Wow! That's great! Woohoo!" I exclaimed. Because as a science fiction editor/writer/fan, I've waited my whole life to be operated on by robots, you know? Because I didn't get the flying cars and I didn't get weather control, so the least I feel I'm owed is a bit of Beverly-Crusher-level medical care.

The doctor was clearly taken aback. "Usually I have to reassure people when I mention about the robot."

When I explained to him—and subsequently, the actual surgeon and his team—about my SF background, they are amused and relieved because, really, that is one hell of a scary-looking robot.

The above photo doesn't really do it justice: I looked around online but couldn't seem to find a good photo of what I actually saw in the operating room, though I have to concede that the thing might have loomed somewhat larger seen from the perspective of lying underneath it on a gurney. From my perspective the thing appeared to be a giant spider-shaped dome with eight legs ending in Edward Scissor hands that took up half the operating theatre. Viewing images later on-line, I am forced to the conclusion that I was interpreting two separate pieces as one--the tentacled-robot pictured above, and the remote control dome. So maybe not quite as intimidating/impressive as my initial impression...but still! 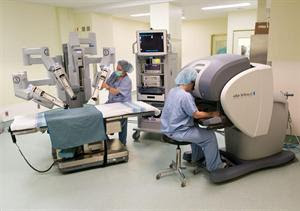 the DeVinci Robot...when I first saw it, the front of the dome (far right, facing the wall) was pushed up in front of the arms (on the left) to give the impression of a single wickedly intimidating robot invader from very bad scifi movie ever...

Having actually had the surgery, I have to attest that I was stunned how little pain I was in. The surgery was 7:30AM to 11:00AM on a Monday, I was up in my hospital room by about 4PM and out the door Tuesday at 4:00 PM. I had proper pain meds in the hospital, and a prescription against need for the next few days, but I was down to Tylenol and Advil within a day or three, which given I had seven new holes in me, a couple of which were several inches long, and was now missing a major chunk of my insides, is pretty astounding. I had anticipated being in severe pain for weeks, but as long as I am reasonably cautious about following the guidelines given on not picking anything up or moving stupidly, I'm just 'sore'. I contrast this to my previous medical procedure, about which my then surgeon had predicted that I 'may experience some mild discomfort', which had left me weeping and wailing in bed for weeks. My family frequently refers to that period to contrast with my wife's, shall we say, more stoic acceptance of pain, so I had always assumed my pain tolerance lower than most. So it was with considerable relief that the pain remained (knock on wood, and with the possible exception of coughing) entirely manageable.

Which is not to say I am recovered. I am still tremendously weak, tire immediately, and sleep most of the day. Walking downstairs to the kitchen remains a significant expedition, and this Facebook post looks to be the major accomplishment of the day, so I believe it when they say I won't be back at work for another five weeks. I am also dreading the follow-up appointment to extract the various tubes still sticking out of me which I am told 'may involve some mild discomfort'. But I've got to say, compared to regular surgery, the robot stuff is to be highly recommended.

And, yes, for the record I know that having a talented surgeon and team of doctors is the key here, and that the actual phrase is 'robot-assisted surgery'. The doctor who referred me to the surgeon and his team said he was the best in the country, and various nurses I met along the way confirmed I was lucky to get him, so credit where credit is due. But given the option, I highly recommend the minimally invasive robot version of the surgery. 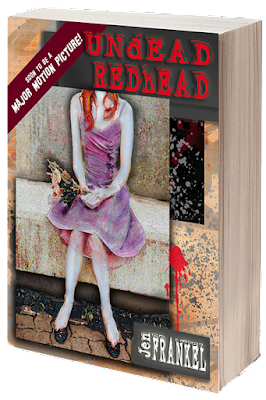 These days, I don't often have a chance to read books I'm not paid to edit, but I met Jen Frankle at Limestone GenreCon this summer, and instantly enjoyed our conversation and hearing her on panels, so pulled Undead Redhead out of my 'to be read pile' and actually spent some time reading just for fun.

The novel is a quirky, funny, and touching satire of modern life as seen through the eyes of newly undead vegan redhead. Some very funny bits, some great writing (nice depiction of heroine's initial denial!) but mostly a light touch takes us through Toronto, social media, and the importance of identity... A nicely Canadian take on the zombie motif.