Kasia and Tigana and a Tire Swing 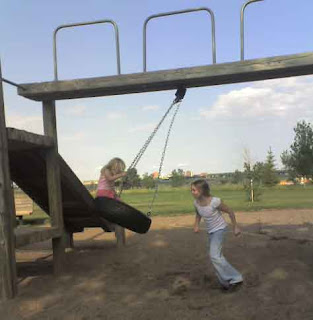 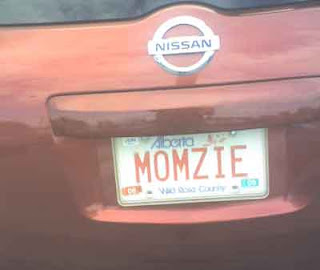 Email ThisBlogThis!Share to TwitterShare to FacebookShare to Pinterest
Labels: humour

Tigana and I were in Fort MacLeod yesterday for her drama camp, and Mary and Kasia were driving out to join us for supper and Tigana's performance at the Empress Theater that evening. At 5:07 PM Mary phoned that she had been delayed leaving because Kasia was having 'a fashion emergency'. It can be incredibly frustrating having a four year old sometimes, because things that seem of life and death importance to them --like pausing to change into a fairy princess costume --may not seem as crucial to us; and vice versa.

While Tigana and I were hanging around waiting, a storm blew up from nowhere. One second we were standing in the sunshine, the next we were running for shelter as a terrible wind swept in. I thought it was raining for a second because the wind was hurling water from the sprinklers across the park to where we were standing. Once safely inside a store, we watched the clerk frantically trying to close the doors that kept blowing open. As the intensity of the storm increased, I looked out towards the direction Mary was coming from and saw a huge black cloud -- not grey, not rain-cloud dark, but actually black. There was something that struck me as distinctly "wrong" about that cloud. The word "evil" came to mind. It's the sort of black cloud that shows up in bad fantasy novels/movies to herald the coming of the evil witch/warlock. I debated whether to call Mary to warn her off, but she phoned me first. "We're okay. If you've heard about an accident, it wasn't us. But we'll be struck here for awhile. Ten cars or so ahead of me, the wind picked up a trailer and dumped it on top of a car. It looks really bad. The car is squashed flat." After describing how horrific the wind had been, she added, "Good thing Kasia made us five minutes late, or that might have been us in the car next to the trailer."

Today we happened to encounter the ambulance driver who had responded to the accident, who told us that since they had all been wearing seat belts, the car's occupants had all survived with only minor injuries when the tornado picked up the car and trailer and flipped them. Again, we had to think how lucky we were that Kasia delayed Mary just long enough that the tornado passed across the highway a half mile ahead of them, rather that picking our Honda Fit up and tossing it around.

Another, though less scary, example of the same lateness serendipity occurred when we were in Edmonton recently. We were hurrying to go down to the Street Performers Festival, but Kasia managed to repeatedly delay us, to the great annoyance of the adults. Mary was still muttering about kids who wouldn't come when called as we got to the LRT station. As we were fumbling for coins and trying to work the (initially) confusing ticket dispenser, Kasia walks over and hugs the kid standing at the next ticket line. We look up, and damned if the family -- also fumbling for coins and trying to work the ticket dispense -- in the next line aren't Kasia's friends from Lethbridge. I'm not sure what the odds are that both our families would be in Edmonton at the same time, or at the same LRT station, or even in adjacent ticket lines, but I am damn sure that the odds of our being there at the exact moment that Kasia's slow exit from the apartment arranged for us to meet is, well...spooky.

So Kasia and her friend spent the entire day together at the Festival having a great reunion, and extended playdate. But I am damned if I know how Kasia contrived to organize it.
Posted by Robert Runté at Saturday, July 19, 2008 No comments:

Our trip to Hawaii being one of the few bright spots in an otherwise downbeat year, I have taken to wearing Hawaiian shirts as my summer default. They're comfortable, longer than most other shirts, and distinctly non-academic.

But yesterday when I went out to supervise the kids in the backyard, I found myself surrounded by wasps the moment I plunked myself down in the patio chair. After several minutes of coping with hysterical kids screaming "wasps! wasps!" I got them to calm down by pointing out that the wasps were not following them, but sticking pretty close to me. "It's your shirt," Tigana suggested. "They think those are real flowers!"

At about the same time I realized the chair I was sitting in had just been through one of the several freakish hail storms that have been plaguing our region, and the seat cushion was soaked through. Dripping from my now soaked pants, I retreated with the kinds back into the house to change clothes, leaving the wasps behind.

The next evening, the kids dragged me outside again, so I waved them off into the yard while I plunked my tired old man self down on the same chair, having briefly checked this time that it was dry.

Again, cloud of wasps. "I really have to change shirts before coming outside," I think to myself. But the wasps are landing on my legs even more than the shirt. And they don't follow me around the yard, just when I am sitting.

In that one chair.

So to make a long story short, it eventually occurs to me to look under the chair where I find this fully developed wasp nest: 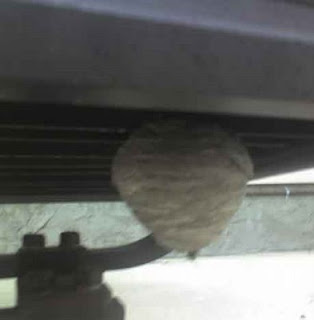