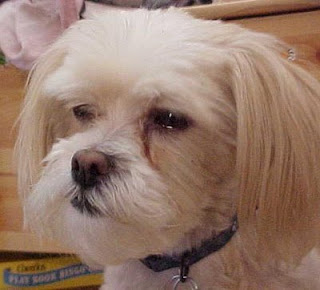 So, I'm having a normal dream, something about waiting in the Green room just prior to addressing the Intergalactic Council (okay, I meant 'normal' for me) when suddenly my recently deceased dog, Pooka, shows up, barking like mad. It's the "Come quick, Jimmy's fallen down the well" kind of barking, so I cast about for the emergency. I become aware without quite knowing how, as you do in dreams, that the (I'm not quite clear who at this point) soul has left the body and we have to get it back in. So the background shifts, and I'm in the basement of my previous house (more or less) with Mary and Tigana all shouting at this free floating soul (which I half realize by now is Kasia) to go back to her body quickly before it's too late, and waving our arms as if to brush the soul back in the right direction on the air currents our fanning creates. Pooka is bouncing up and down and barking more frantically than any of us. Then I say, "I can't see it!" because, you know, souls are invisible, though I can approximate where there is a presence. And Pooka looks at me with "You're an idiot" frustrated expression I may have seen on his face more than a few times when he was alive, and he suddenly flops down, stops barking, or moving for that matter. And then there is tiny red spark floating up from Pooka. I know it is his soul floating up out of his body. It looks like a tiny solar system, with tiny loops within loops and a central red core, all sparkly in a tiny point of light kind of way. And it is coming towards me, and Mary calls, "Look out, don't let it touch you!" and I kind of lean back out of the way as it floats towards me, but it suddenly zooms into me, and I am half afraid of what it will try to make me do -- and then I wake up.

I get up somewhat unwillingly and sluggishly wander to the bathroom, but there's this sense of -- well, Pooka still barking -- that sends me over to the baby monitor we still use to listen to the kids at night...and discover the plug has pulled out of the wall, and it's not on. So I run down to check on Kasia (not, I realize later, Tigana and Kasia, but specifically Kasia) and discover there is vomit everywhere -- the sheets, the walls, her stuffies; and she is fast asleep, face down in a two inch deep pool of the black and grey guck. I call Mary, and she runs down stairs, so I call out, "Kasia's okay" to reassure Mary, and then realize I should maybe check before I say that, but somehow I just knew it was true and that I had gotten there in time. Mary takes Kasia upstairs to our bed for the rest of the night, while I spend the next hour cleaning up the bed, walls, and surviving stuffies.

Or is it really that the spirit of our dog is still watching over us and woke me up to save Kasia?

Pooka was, after all, no ordinary dog; Mary named him Pooka for a reason. And regular readers of this blog will recall that as a toddler, Kasia had had a tendency to drop dead at random intervals for a couple of minutes at a time (see reflex anoxic seizures) so her having an out of body experience is not entirely out of the question.

Indeed, while taking her bath last night, she had held her breath for fun, and I had watched as her face turned bright blue in seconds -- for other kids that's a metaphor, for Kasia, a horribly accurate description. I had tried not to freak, since it wasn't an attack, and there is this terrible fascination in watching this bright blue pattern emerge out of nowhere on her face, but I did ask her to stop doing that.... Anyway, I hadn't thought of her seizures for years, but maybe that bath-time incident is why it turned up in a dream last night -- but um, how is it that dream coincided with her actually being sick?

Whatever explanation one comes up with in the cold light of day, at 3AM, the spirit of your recently departed dog waking you up to save your daughter seems a lot more credible. I tried to describe the feeling to Mary, and all I could come up with at 3AM was 'creepy, but in a good way' but that's not really it. "Other worldly?" It's hard to describe. But there's a quality completely different from my other dreams -- and as an SF reader/writer, I'm not talking content here, because the content is almost always way out there, depending on what I've been reading. But this was...'more real' doesn't describe it; nor 'more vivid', nor 'more urgent'... but more...'other directed'?

Anyway, Kasia's fine, though we sat up with her through the night as she threw up several more times; looks like Norwalk virus to us. Kasia already seems over it, but by mid-afternoon Mary was throwing up and Tigana looks to be next. Me, I'm stuffing in the Cold FX, because you never know, it might help some.
Posted by Robert Runté at Sunday, February 22, 2009 No comments:

Dog training has been a slow process for us. Jackie is a hyperintelligent dog, so the problem, I know, lies largely with us.

The first problem is that I started out talking to Jackie in "Dad mode", as if she were one of my kids. My natural tendency is to try to reason with Jackie and explain what I want, but of course, dogs don't have language, so what she hears is "Blah blah blah blah, Jackie, blah blah blah." which is probably not very helpful. And using my soft Dad voice meant that half the time she didn't even know I was talking to her. So the dog trainer told me, "Fix a mental picture in your head that you've come from the store and found that Jackie has trashed the inside of your car" and that seemed to help a lot. Now I bark at the dog, and at least she knows I'm talking to her.

But that one was obvious, and sort of understandable.

More troublesome was Jackie barking at other dogs on our walks. Even though she is a kind and gentle dog, she'd bark like crazy at certain other dogs, leap up, strain at the leash, even nip at us for holding her back. It was pretty problematic. The trainer suggested getting Jackie to "sit" while the other dog passed, but this was not initially successful. I'd get Jackie to sit, she'd sit for 3 seconds, I'd reward her good behaviour with a "Good Jackie!" and she would leap up and start barking all over again. This would be repeated over and over again -- I'd no sooner get her sitting then she'd leap up again. It was frustrating.

Especially for Jackie....I eventually figured out that we had inadvertently taught Jackie that her release phrase was "Good Jackie". So from her point of view, I would order her to sit, then say, "okay, do what you want!" then get angry and yell, "sit" and no sooner have her sitting, when again I'd give her permission to go at it again. She must have thought "Make up your stupid mind!" or "stop teasing me!" I guess what happened was as I was teaching her various other things, we would do the 'trick', give her her treat, then say "good Jackie" and release/distract her to begin another round, so that without realizing it, "good Jackie" (or at least "good Jackie" the way I was saying it -- "good jackie" from my wife appears to be a different command, since she says it with a different intonation -- did I mention that Jackie is hyper-intelligent?) means, "command is over". So things have gotten a lot better once I replaced "good Jackie" with the new command, "Walk on" once the other dog has passed.

Another example of miscommunication was my "Other side" command, which initially worked great at getting Jackie to switch from my right (or the 'wrong' side) to my left when we walk. I'd let her pee, or she'd go sniff something interesting, but come back to my right side, I'd say, "other side" and she instantly switch to my left side. It was great. Except one day she absolutely didn't get it. The more I insisted "other side", the more stubbornly she insisted on walking on the right. Eventually we came to a standstill, and she just sat down in frustration. I stopped and tried to think what was going wrong. "Other side!" I barked experimentally. Jackie stands up, looks down at the grass, gives the dog equivalent of a shrug and sits down. So I eventually figure out what the problem is. On our usual walks through the neighbourhood, our circular route keeps the grass on my left side, the curb on the right. At this particular juncture, I had taken a different route, and the curb was on my left, the grass on the right. Apparently, "Other side" meant to Jackie, reasonably enough, "go to the grass side". So here she was standing on the grass, and I'm shouting "Grass side!" to her.

Email ThisBlogThis!Share to TwitterShare to FacebookShare to Pinterest
Labels: Jackie

Okay, this is pretty cool.

Arthur Slade's article on writing novels while on a treadmill.

I'm very tempted to try this....
Posted by Robert Runté at Wednesday, February 04, 2009 No comments: