Just realized that January 15th was the 10th anniversary of this blog. So I probably should have done something specialish on the 15th....

But well...who blogs anymore? I get relatively few readers and fewer comments here, whereas if I post something random on Facebook, I'll often get 20 comments within the hour.

Not that Facebook is doing that well, either.... My students are abandoning it for timblr or even pinterest (people go to Pinterest less frequently but browse it longer). And Twitter, of course. I mostly try to avoid Facebook et al during the day, lest it suck the time out of my life, but I do check Facebook and Twitter on my phone whenever I have to kill time waiting, e.g., picking up the kids from school or standing in line at a good restaurant. I find typing on my phone a pain, so I mostly just read what others have to say, take note of current trending issues among my friends and colleagues, or take advantage of the clipping service Twitter can be. A lot of my Twitter feed is course-related, people tweeting about breakthroughs in science and technology I can refer to in my cyberculture course, for example. Turns what used to be dead time to productive use.

I notice I'm not alone. In line at Cora's the other day, all but two of the thirty or so people in line were on their smartphones. Made me wonder if people are more patient than they used to be--no, I mean, more tolerant of delays and waiting because they can do something productive, or productive-like, while they are forced to wait. I suppose it actually makes people less patient in the long run, less able to deal with periods of forced inactivity. I know I go slightly bored now when I forget my phone or have to hand it over to the 9year old to keep her entertained in line. Research from PEW a while back commented that 26% of Americans said they could not manage without their cell phones. I never used to get bored because I could always write the next scene of my novel or etc. Now I read Twitter.

Constantly amazed at how many people have no idea how to use Twitter. So many authors just tweet the same "buy my book" line every few hours. That's not information, that's spam. I delete such people immediately from my feed; when Twitter suggests new people to follow or someone follows me, I often take a look, but as soon as I see self-advertizing, I move on. The occasional tweet about a book launch is okay, because I might want to know what they are doing and if not, I can ignore the occasional commercial. But repeating the same tweet over and over is just stupid. So many authors I respect seem to do this. But the authors who get to stay in my twitter feed are the ones who tell me interesting stuff. Things they've notice in the paper or books they've found by other people or the research they are doing for their book that turned up some interesting fact, or something funny. Those are people worth reading. Don't care about whether you are having coffee or a bath, don't care how your cats are doing, don't want to hear about your neighbours unless you can make it funny.

The funniest guy on Twitter is Tim Siedell @badbanana. E.g., "If we do mint a $1 trillion coin we should intentionally make a mistake on it so it's worth even more to collectors." or "Going to a concert tonight. Doors open at 7pm, according to the ticket. That's a pretty impressive opening act." Brilliant stuff. I bought his book.

So I mostly blog now to keep track of stuff for myself, an on-line diary. I'd do more entries but the best source material is about the kids, but unfortunately they are now old enough to read the blog, so I mostly can't write about the really good stuff any more. Still, life in the old blog yet. Hopefully.

Comic book writer Mark Shainblum once observed that "I often feel like a character in someone else's story. I want my writer to be Alan Moore, but I frequently think it's Phillip Roth. Sigh."

And I thought, that would make a great party game, or one of those annoying-Facebook quizes: If your life turned out to be just a character in a novel, who would your author be?

I can't come up with an author for my own life though: I need an Russian author's attention to pointless minutia and a Canadian author's themes and obsessions, but tempered with an American mass market author's optimism. Who is as verbose as a Russian novelist, has a Canadian's characters and lack of action, but is still upbeat? Can't think of anyone to fit the bill.

For me, the realization has now slowly dawned on me that instead of the hero in the novel, I'm just one of the background characters (you know, not really fully developed, just sketched out in broad stereotypical strokes) in my daughter's or wife's or even student's stories. Here I thought my life was entirely about me, but now reached the age when realize I am just going to be "annoying professor" or "neighbour with loud dog" when the credits roll....

Though, you know, being Canadian, I'm mostly good with bystander role. Adventure is unpleasantness that happens to other people, and actually, not being the hero is all to the good. "Neighbour with loud dog" is a satisfyingly stable life, and "annoying professor" gets some of the better lines in the book. IMHO.

Posted by Robert Runté at Thursday, January 10, 2013 No comments:

I have previously mentioned our dog Jackie. Much as we love Jackie, she is not cuddly. Well, she thinks she's a lap dog, but at 60lbs, this does not work that well for us. Having dislocated my wife's arm and having dragged the 9 year old down the block, even walking Jackie is a challenge. So recognizing that my wife desperately missed Pooka, her departed shih tzu, I gave her a certificate for the rescue dog of her choice so that we could adopt a dog Mary could cuddle and that Kasia could safely walk. Having reviewed hundreds of dogs through the local and Calgary dog rescue agencies, we today brought home Higgins, with a view to adopting him, provided he and Jackie can work things out. 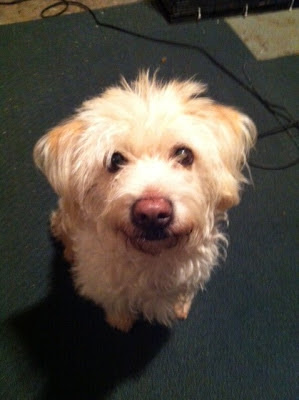 So far Higgins and Jackie seem to be getting along, Mary seems to like him a lot, and the kids are fairly enthusiastic. So we'll give it a couple of weeks, but I think this may be our new/second dog.
Posted by Robert Runté at Monday, January 07, 2013 No comments: