Kasia's friend Zane is in Japan for this semester, so they have been exchanging emails; so we thought it would be a good thing to post some recent pictures of Kasia for Zane here: 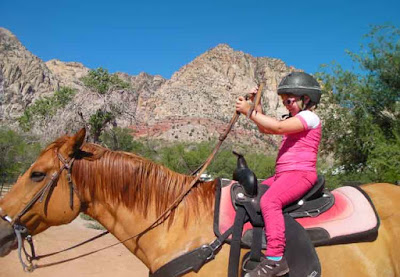 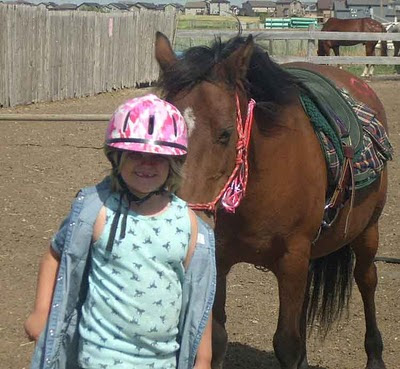 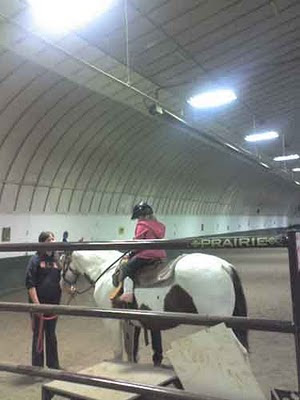 Now that winter is coming, Kasia's riding lessons have switched to an indoor facility.
Posted by Robert Runté at Tuesday, September 21, 2010 No comments:

So, I was cleaning out the basement office last week and stumbled upon my old writing files, so I dusted them off and sorted through to find the original outline for the novel I am currently at 90,000 words on. Several facts struck me.

First, the outline (which would have come after a long period of thinking of the story before committing an outline to paper) is dated March 17, 1975. So that means I have had this novel in my head for well over 35 years. The original outline is very close to the current version; as close as I would likely stick to any outline in the actual writing stage. (My characters are the sort who insist on saying what they want, even when it means going off script.) So that's pretty amazing to me considering I haven't seen this outline since filing it in this filing cabinet when I first moved to Lethbridge, 20 years ago. I've added the character of a young boy sometime in the 1990s (because Sean Stewart told me it is next to impossible to write good action SF with kids in it; so, you know, wanted a bit of a challenge) and I added a dog during the actual writing (because I got a dog during the actual writing, and because, you know, the boy needed a dog). So considering it's all just been scenes evolving in my head all those years, bit surprised to see how close I am to original idea.

Second, the two pages of opening scene (all that existed aside from the outline) are hand printed on strips of lined paper stapled to an 8.5 X 11 sheet. That is, I had written a bit, then changed my mind, cut the sentences I wanted to save out of the page, and stapled them to a new sheet, to continue writing; then cut the bottom off that page, and stapled surviving paragraph to a new sheet; and repeated this several times until filling the page. Which is how one did word processing, circa 1975. 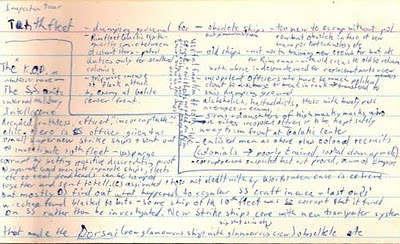 Third, the initial outline is on a 5X3 index card hand printed in such tiny letters I cannot read it without a magnifying glass. I recall that I used to keep all my notes that way. Unbelievable -- and unreadable -- to me now. I hereby solemnly swear not to take typing for granted again. Long live the keyboard! (If I thought typing 90,000 word manuscript was hard, I cannot imagine what it would have been like writing a novel by hand.

Fourth -- and this really hurts -- are lines like this piece of dialog: "Frayer is well into his fifties, but don't let that throw you, he's a damn good officer." Questions of literary merit aside, it's a little annoying to have one's younger self send such a clear message to me now, saying I am of such an advanced age to be officially over the hill and my competence suspect. *Sigh*

Fifth, re-reading this outline, it appears that I didn't have any ideas back then either for what comes next. I have about three scenes left to cover on the original outline, and then I'm on my own.... 36 years and I still don't know how the stupid book is supposed to end.
Posted by Robert Runté at Tuesday, September 14, 2010 No comments:

This being the start of school, and Kasia's first week in Grade 1, we were asked to write a letter to her teacher to help her place Kasia in context. This is an abridgement of what my wife wrote:

Kasia is a really cool kid. Sometimes she is shy, but once she gets comfortable in a setting, she tends to dominate a room and ‘take charge’. For this reason, she is particularly excited when she gets to be an assistant to her teacher and really enjoys helping out when there are kids who are new or struggle socially.


We have always been impressed by Kasia’s sense of compassion. If a child is hurt or crying, she will seek out the child, ask to help and will connect on a very empathetic level with their emotional state. She feels others’ sufferings very deeply—sometimes too deeply. Although this empathy will be applied to other children, it is most apparent when she sees/hears of the suffering of an animal. For this reason, she is deeply connected to issues of animal cruelty and neglect. She is very interested in wild horse conservation and dog rescue work. We have a dog, Jackie, who was rescued from an environment where she suffered terrible facial/head injuries and lost an eye [her full name is One Eyed Jack(ie)!] If Kasia had her way, we would have a ranch with hundreds of horses and dogs. Just to warn you—if there is a dog being walked through the playground, Kasia will be right there. We have instructed her to always ask permission to pet the dog first and she tends to be quite good about this.

Kasia has a really great sense of humour. She loves puns and practical jokes. She often comes out with witty comments which seem beyond her years. Indeed, we often discover the extent of her vocabulary when she comes out with a witty retort using unexpected words. She might have a future as a standup comedian. She has done improv through drama programs and shines in this area.

Kasia loves to sing. She has a lovely voice and can riff on the harmonica like an old blues singer.

Kasia has been very reluctant to learn to read. Her explanation to us is that ‘reading is what you do when you don’t want to play ponies’. And, there is nothing better in her mind than playing with her toy horses. Her sister, who reads a great deal, uses the excuse/explanation of reading to avoid playing with her sister. Typical teen behavior, but Kasia seems to blame the reading, rather than her sister.

Kasia loves science. She particularly loves doing experiments or studying something (like a leaf) in great depth, memorizing every nuance. She has recently developed a fascination with history and has started requesting history lessons at night instead of bedtime stories.

Kasia wants to be a vet when she grows up. Actually, she wants to own a horse ranch in Hawaii and work with rescued dogs and horses. She is totally obsessed with horses and loves to ride. She takes riding lessons and asks daily for us to buy her a horse of her own. Any writing or reading activity which involves animals will engage her attention.

Posted by Robert Runté at Monday, September 06, 2010 No comments: