Not one of my best moments...

This is wrong on so many levels, but they say confession is good for the soul....

Wednesday I had a couple of teeth on the upper right crowned, only one of them turned out to be past saving, and the dentist had to pull it instead. So getting a tooth pulled isn't great, and the extraction was 'complicated' -- which means it felt like they had to break my upper jaw/skull to get it out, but okay, what's done is done. They sent me home to take Advil and hope for the best.

I have to say, getting massive amounts of Advil in there before the swelling started worked wonders for keeping the tooth pain down to mild background noise, though the bleeding did make me nauseous, and Advil doesn't agree with my stomach all that well. The hole in my upper jaw where the tooth used to be reminded me pretty fast if I forgot to take the next dose on time, or if a stray piece of pasta wandered over to the side of the mouth I wasn't eating on. But four days on, it's not exactly foreground.

Enter my wife's amazing spaghetti sauce. She's trying to keep to foods I can chew easily, right? But her spaghetti sauce is really good so it's no hardship for me or the kids. In fact, I blame her for what happens next.

We have this wicked spaghetti ladle, specially designed to scoop up spaghetti in its wickedly long prongs. And having finished my portion of tonight's spaghetti, and as much of the kids' portion I could sneak off their plates when they were off arguing about something, there was still a little smidgen left in the cooking pot -- which I scooped up on said pronged ladle, and, um, stuck in my mouth. 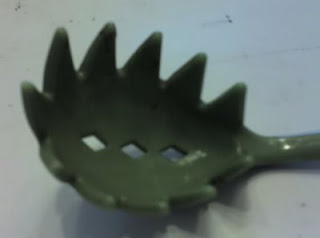 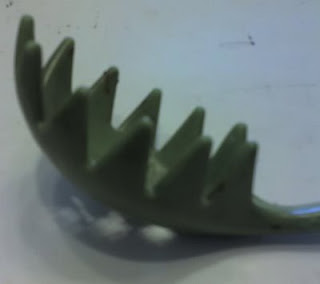