Went up to visit my mom this weekend, and stopped into the UofA bookstore to have a look at the Expresso book machine. 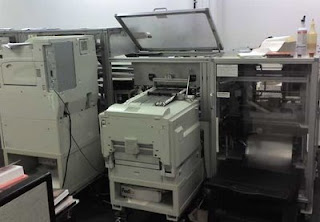 The UofA machine is a custom built model one (though you can't see 'em in this photo, it has four printers attached instead of the usual one) was installed Nov. 2007.

Apparently the machine attracted a lot of publicity when it was installed, but living 500 k away in Lethbridge, I hadn't heard of it at the time. Having recently seen the video on the version 2, I sought the machine out and was surprised to find that the UofA had already been using theirs for a couple of years.

I was extremely impressed by both the quality of the books being printed -- they were distinguishable from the regular pocket books or trade paperbacks on the nearby shelves only by the superior crispness of the Expresso's interior printing -- and by the passion of the woman in charge who clearly took pride in her work, and went out of her way to be helpful.

The original version was just kind of dumped in the back of the bookstore, and the operator had to figure it out -- no training provided -- and she also has to do the repairs herself. It's not like having a photocopier where you just phone the service guy. When something breaks that she can't fix herself, they have to fly an engineer up from the factory floor. But the flip side of that need for self-reliance was the complete sense of ownership and commitment to the process-- we talked at some length about how she'd experimented with different types of paper and ink and cover stock to arrive at the perfect combination. And she really does produce a superior product. She showed me a book from the UofA Press, and her copy of the same book, and I literally couldn't tell the difference. Given that many of the smaller presses are opting for cheaper paper and particularly cheap coverstock and bindings, the Expresso product is clearly superior.

The version 2 is smaller, easier to operate, and cheaper. She told me that the Expresso people had spent a lot of time debriefing her about the machine and incorporated a lot of her feedback into the Version 2. So it's the version 2 that's being rolled out as a commercial mass market product.

The sociological implications of this machine are staggering. When it first came out ten years ago, the product was not that great and a lot of people who looked at the first two gigantic clunky machines were not impressed. But the woman at the UofA told me that those were just concept demo models and never intended for commercial use. So there was a lot of talk about publishing on demand (POD) back then, but the legacy publishers sort of pooh poohed it.

But the version at the UofA is a different matter entirely. These books do not look like amateur photocopied knockoffs -- these look like what they are, legitimate books. The day I was there, she was printing off copies of Kim Campbell's autobiography. The legacy publisher that had originally brought the book out isn't interested in warehousing a few thousand copies or processing occasional orders -- the big publishers require big numbers to achieve economies of scale -- but by POD Campbell can keep the book in print and make it available if and when needed. Similarly, profs can self-publish texts for their own courses (publishers aren't interested unless the course or its equivalent is offered across multiple campuses), authors can self-publish, and so on. One budding local SF author had printed 50 copies on the Expresso and taken the book to a bookfair -- where Penguin bought the book and signed the author. Others use the Expresso to print off fifty copies (or just one!) of the family history, or their collection of blog posts, or whatever. The possibilities are endless.

This, I think, changes everything.

For the price of the machine (about $150,00) one could open a bookstore. The only space requirement would be a counter, enough room for the photocopier-sized machine, and a cash register. Personally, I would throw in an expresso coffee machine and half a dozen tables so people could have a latte while they wait, though since it only takes about 10 minutes to print and bind your book, there is a danger that your book would be ready before your coffee. It would be sooo easy to add this to any of the existing coffee shops (Starbucks/second cup/Esquires/etc) in town. No hundreds of feet of bookshelves, no rent, no stock, no stock-taking, no theft, no shopworn books, no sending unsold books back, no remaindering books that you couldn't sell, no being stuck with unsold books. Nothing but a terminal where customers browse through any of the 650,000 titles available online. Or bring in their own flash card with he book they want. So infinitely more selection than existing bookstores; but no waiting four days for delivery from the online stores and no shipping costs. Lower carbon footprint for shipping and wasted paper. Win-win-win.

Just like the ipod effectively eliminated the need for record stores or record companies and individuals can simply record their garage band and upload it to the net; now authors can simply upload their books to the net, and people can download to their Kindle or sony reader -- or PRINT IT OUT AS AN ACTUAL BOOK.

Or to approach the topic from the opposite direction: By sheer coincidence, the other person I talked to on campus this weekend was UofA engineering librarian Randy Reichardt. Randy took me round to look at some recent acquisitions the Uof A library had made related to SF fandom, fanzines from the 1930s and 1940s, SF fandom being a mutual interest of ours. These included copies of many legendary fanzines from that era that I had heard of but never seen. These amateur SF magazines were produced on hectographs (how many of you have ever seen a hectographs? I've only ever seen 1 and I am OLD) and Gesteners (ABDick in the States). The hectograph art had stood up very well over time (unlike ditto which often promptly faded to invisibility). There followed a discussion of our own fanzine years, and the sadness that that era was now over. Modern fans -- with a few rare exceptions -- don't produce fanzines anymore, but instead produce webpages and blogs. These formats are obviously much superior: color is as cheap as black and white; there are no mailing costs; no printing costs; and the audience / print run (potentially) infinitely larger. As wonderful a vehicle for fandom as the internet is, I still miss the old days of the printed zine.

Well...with the Expresso Book Machine, or other POD systems, those days are back again. Only this time, we're talking whole books! It has once again become ridiculously easy to put out your own product. Cost is 7 cents a page, so a hundred page book comes out as $7.00 (same cost for trade paper or pocket book, though you get more words per page in the trade). Add on shipping and handling, and what, $10? Which is what pocketbooks cost these days, and half the price of a trade paperback.