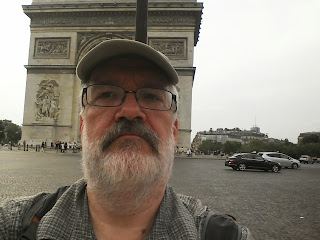 When we were in London this summer, Mary arranged for me to go to Paris for lunch at the Eiffel Tower. Partly, it was the absurdity of going to another country and back for lunch, but mostly I had wanted to take the Chunnel. Ever since I can remember, I grew up reading about how they were going to push a tunnel under the English channel someday, but it was widely dismissed as scifi. I have crossed the channel several times by ship and hovercraft, but the Chunnel has always been on my bucket list as part of the future I had been promised in the 1950s. So, here it is, a reality, so had to take it. The Eurostar was well organized, very fast, and goes through a lot of (ear-pooping) tunnels before it gets to THE tunnel, so in someways a bit anticlimactic because it's, you know, just another tunnel, albeit slightly longer than the others. Still, you know, kind of cool that this SF future was real and I was actually doing it. Commuters all around me taking it for granted. So cool.

Halfway through the tunnel, the large black businessman squeezed into the seat next to me suddenly closed his computer and turned to me, and said, "We're under the ocean now, you know! Do you realize just how crazy that is! I mean, when you really think about it, how cool is that!"

And we just sat there appreciating our mutual sense of wonder at it all, and then he opened his computer again and started typing and I went back to reading. But I loved that shared moment, and that at least some commuters still got it!