Mary and I were in Calgary last night and had the opportunity to attend the 'preview' opening of Stewart Lemoine's latest play, Evelyn Strange at the Vertigo Theatre and WOW! were we impressed. The best play we've seen in a couple of years. Absolutely hilarious and intriguing. Great writing and excellent performances and direction, nice stage design -- really, a flawlessly mounted production. I guessed who done it half way through (though that wasn't really the core mystery) but the dialog was absolutely brilliant, and the handling of the reveal the best of any play of this sort. Highly recommend this production to anyone in Calgary; the rest of you should demand this play be brought to your local theater.

Earlier in the day we took the kids to YStage presentation of Axis Theatre Company's King Arthur's Kitchen, the best kids' production we've seen in five years. Excellent clowning to get across the basic Arthur storyline, with lots of frantic running around and silliness.

So that's two for two from Vertigo, so definitely going to start making a point of going -- especially when they mount both the kid and adult play the same weekend so we can kill two birds with one commute.

It's funny, because Mary and I had been discussing at length what characteristics a good children's play has to have, and this one had 2 out of the 3 elements perfectly done - in contrast to a string of disappointing offerings from Storybook Theatre.

Next month is ScriptFrenzy and if I weren't already committed to finishing my novel (and editing three books for Five Rivers) in that timeframe, I'd give a children's play a go. (My play is entitled "The Princess and the Zombies" and has Kasia as the target audience and Tigana as the lead actor, so I'm pretty sure I know what I'm doing! But that will have to wait until next year.
Posted by Robert Runté at Sunday, March 14, 2010 No comments:

I hadn't come across Pigeon Impossible before, but anxiously await other Walter Beckett cartoons.

(Both pointed out to me by Matt Baum -- Thanks!)

Posted by Robert Runté at Wednesday, March 10, 2010 No comments:

Publishing: The Revolutionary Future by Jason Epstein provides an interesting take on cultural implications of digital publishing in current issue of New York Review of Books.
Posted by Robert Runté at Wednesday, March 10, 2010 No comments:

So this was pretty cool: the Lorikeet Landing exhibit at the San Diego Zoo's Wild Animal Park. 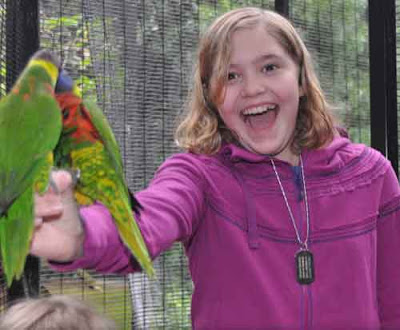 Tigana reacts to Lorikeet landing on her. 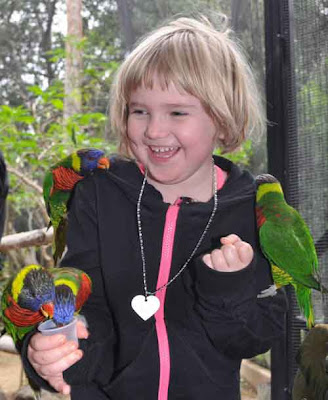 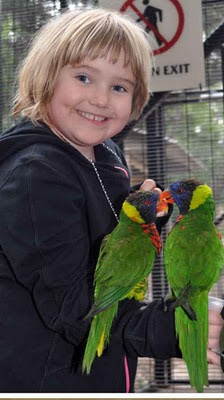 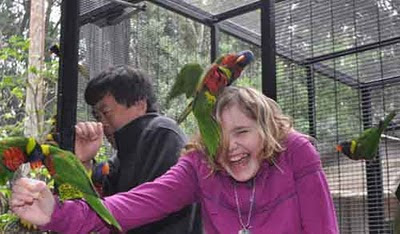 I love how my kids are enthusiastic about things others find less exciting (e.g., man behind Tigana, who is clearly less pleased with the birds mobbing people).

We were in San Diego over Reading Week in Feb.

Okay, going through my computer throwing out old files, came across this notice of a great lamp. I would sooo buy this!
Posted by Robert Runté at Sunday, March 07, 2010 No comments:

So my wife, Mary Runté received Tenure and promotion to Associate Professor today. The committee met, I am reliably informed, for about six minutes -- three of those spent introducing the External, and going through the paperwork, so not a lot of debate over whether she had made the bar for either tenure or Associate. The comments from all the external reviewers were basically rave reviews without a single reservation (something almost unheard of!), and the fast turn around in the meeting was another form of validation, so Mary's feeling pretty good about the whole thing. I always knew that she was a slam dunk to get tenure and promotion, even given the occasional nonsense politics that interfere with the process in some departments/faculties, but its always nerve wracking until its official.
Posted by Robert Runté at Thursday, March 04, 2010 No comments:

So I'm out walking the dog the other night, when a flicker out the corner of my eye draws my attention to Orion's Belt. And I am just in time to see the three stars of Orion's Belt peel off to the right and zoom across the sky. And I'm thinking, "That can't be good!" Because I'm pretty sure we have been tracking those three stars in particular for about 5,000 years. Another star gets up and moves, maybe it was a piece of space junk or just a passing plane, not a star at all, so no biggie. Or even if there was an object that we had thought a star but turns out to be an alien observation station, if it decided it was time to leave, well, maybe they were hoping we wouldn't notice and maybe we wouldn't so much. But I can pretty much say that if the aliens running the three stars of Orion's Belt decided it was time to go, and they go off in formation like this, that really can't be good.

Then, of course, I eventually worked out -- say 20 seconds later -- that they haven't moved at all, and that I have been tricked by the 'moving train on the other track illusion' -- that is, Orion's belt has stayed safely stationary, but the two other stars in the background against which I had been tracking their motion turned out to be two planes travelling in parallel have an arc apart. But the illusion was a very powerful and convincing one, right up until the planes moved to far out of the field to maintain the illusion. And for the record, 20 seconds is a very long time when you think you're watching the end of the world....

In a completely unrelated incident, my dog has been driving me crazy, barking in the backyard. Mostly she is a quiet, calm, wonderful dog, but whenever the neighbour behind us lets her dog out into her backyard, Jackie goes berserk trying to break through the fence to kill it. The neighbour's dog is the size of my hand, so no threat to Jackie, but either she doesn't know that (it's a solid fence with no eye holes); or she's seen the dog and mistaken it for a barking rabbit. Whatever the case, Jackie's barking is enough to wake the entire neighbourhood so Mary and I will go out onto the deck and call Jackie in. Jackie rushes back for Mary, but studiously ignores my shouts for her to "come!"

On one recent occasion, I was at the back door when Jackie started up, my shoes were upstairs at the front door, the backyard was under three feet of snow, and it irked me that Jackie would come for Mary and not me, so I might have allowed the tiniest bit of an edge into my voice as I shouted "Jackie!" repeatedly. Louder and angrier, "Jackie! Jackie!, For God Sakes, Jackie!" After about 5 minutes of this, the neighbour had retrieved her dog, Jackie had stopped barking, but was still refusing to acknowledge me, merely sniffing along the fence for the spoor of the hated dograbbit. "Jackie! Jackie!" I continued shouting, in what I might in hindsight now confess to be slightly shrill tones. When a peeved voice a couple of houses down answers, "What? What already?!" And it occurs to be in one illuminated moment that (a) The neighbour two houses down on the other side of the lane is named "Jackie"; and (b) I have not had occasion to introduce her to our new dog, "Jackie".

Oops. So now I am careful to shout "Come! Here girl! Good Doggie!" rather than my dog's name when yelling into the back yard. Or, you know, saying, "Hey, Mary, the dog's barking in the back yard again! You'd better go call her in..."
Posted by Robert Runté at Tuesday, March 02, 2010 No comments:

interview with me at Five Rivers

Interview with me by Lorina Stephens at Five Rivers Publishing blog today. Mostly about how I expect to fit in at Five Rivers, bit about my writing, and so on.
Posted by Robert Runté at Tuesday, March 02, 2010 No comments: