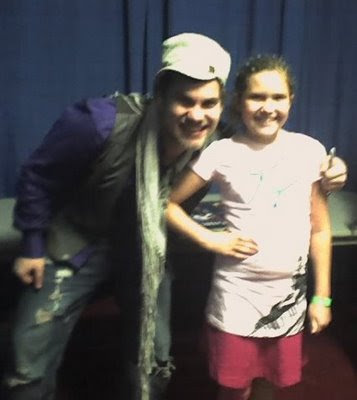 Mary took Tigana to see Theo Tams and the other Canadian Idol finalists tonight as Tigana's Christmas present... and so naturally -- given the charmed life my daughter leads -- they were invited backstage for a meet and greet with all four performers. 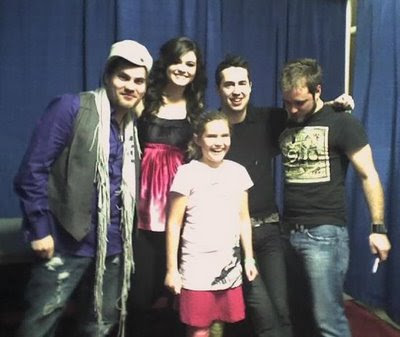 Almost looks like the four Idol finalists are Tigana's backup singers in this shot...

Posted by Robert Runté at Saturday, November 29, 2008 No comments:

Check out this group on Facebook that wants to push William Shatner for the next Governor General (2009).

Not sure how serious Gingras is about this one, but it is an excellent example of Facebook (and similar social networking software) implications for grass roots political movements -- and how democracy really does mean "mob rule".
Posted by Robert Runté at Thursday, November 20, 2008 No comments:

Canadians have had a long history of comparing America to the Roman Empire (e.g., The New Romans, Hurtig, 1968.), so I couldn't help drawing a parallel between the election of the first black (well, he's a bit black anyway) President yesterday, and the election of Trajan as the first non-Roman emperor. Trajan revitalized the empire simply by being Emperor (though he was also a pretty good organizer, general, and etc. as it happens) because he proved that the extension of Roman citizenship to everyone in the Empire was authentic. You no longer had to be a Roman to work your way up to the seat of power. This immediately united the Empire because every general and governor stopped dreaming about rebelling and setting up their own little fiefdom, and instead took seriously the thought that one day they might get to be Emperor of the whole thing. Listening to CBC's The Current this morning interviewing social workers in Chicago and how, knowing that Obama had started as an activist in their community, they were all saying that his election proved that anyone could make it to President, that the next generation of kids could look to him and think, all I have to do is work and it is possible to make it in America. It's complete nonsense, of course, you still have to come from a rich and powerful family to make it and everything else is just ideology and statistical outriders, but the reinstatement of one of the central hegemonic ideals of American democracy might just save that nation from going further down the dark road (Weimar republic parallels!) it appeared to be on.
Posted by Robert Runté at Wednesday, November 05, 2008 No comments: 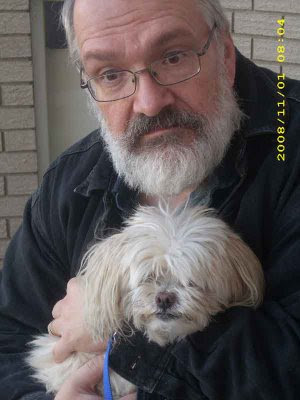 Depressed today about having to take Pooka, our 18 year old 'puppy' to the vet for the last time. He's had a long and rich doggie life, and he got six more months of good life than the vet had predicted when we first got the terminal diagnosis. but it's now come to the point where if we wait any longer he will likely start to suffer. So, however selfishly we would like to keep him around longer, it's time.

Our other dog was, well, a dog. So while we loved and will miss Portia, it's not the same. Pooka was an old soul. He understood things dogs don't; he saved my wife's life on at least a couple of occasions, and it was he who told Mary to go with me. (Every other potential boyfriend had been barked out of the house, and on one memorable occasion, not allowed in the door; until me --Pooka sniffed me a couple of times, and jumped up into my lap. Mary's expression at that moment should have told me something, but it wasn't until he was my dog too that I came to understand and rely on his ability to correctly judge people.)

So just a quick story to illustrate what I'm talking about. Shortly after Mary and I started dating, she left the dogs with me while she went on a week long speaking tour. Portia was fine it, because, well, she was a dog and anyone who petted and fed her was okay with her. Pooka on the other hand deeply resented being dumped with a stranger. When Mary phoned to check on the dogs, and to visit with me, Pooka came out of the kitchen at the sound of the phone and gave me -- I swear -- "Is that her?" look. So I said, "Hey Pooka, it's Mary!" pointing at the phone as if a dog could understand me. So he looks at me with this unmistakable "tell her this from me" look, lifts a leg, and pees in the middle of my front room directly in front of the telephone, then turns calmly and walks with great dignity back into the kitchen.

It is hard to yell at a dog indignantly when you are collapsed in helpless laughter, so there was a bit of a delay before I could convey to Mary what had transpired, but I never again made the mistake of thinking of Pooka as just a dog. He will be sorely missed.
Posted by Robert Runté at Saturday, November 01, 2008 No comments: