I am eligible for one of the 2012 Aurora Awards --Canada's top awards for Canadian Science Fiction and Fantasy--in the category, "Best Short Form Work in English," for my short story, "Split Decision" in Tesseracts 15: A case of Quite Curious Tales

If you liked "Split Decision" please consider nominating it. (Though with that title, you just know the best it could do is a tie!)
Posted by Robert Runté at Tuesday, January 31, 2012 No comments:

Email ThisBlogThis!Share to TwitterShare to FacebookShare to Pinterest
Labels: my writing, Robert, SF 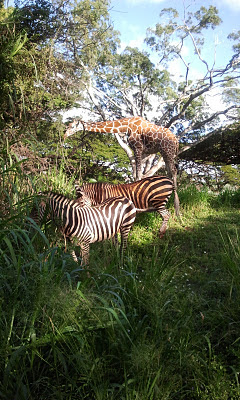 Like this photo I took at Honolulu Zoo last month.
Posted by Robert Runté at Thursday, January 26, 2012 No comments:

The Engine of Recall by Karl Schroeder


Schroeder makes my list of top ten authors, so I've been meaning to read this collection for some time. I tend to prefer novels to short stories for bed time reading, and I'd already read several of these when they first came out, including one I'd published myself as co-editor of Tesseracts 5 (and was subsequently reprinted in David Hartwell's anthology The Hard SF Renaissance) -- I like to think I was one of the editors that 'discovered' Schroeder, though that's pure pretension on my part--so hadn't got around to the collection. For one thing, I knew that they would be more downbeat than the novels, and that turned out to be true. His novels all have (relatively) happy endings. And I guess that is sort of true of the stories in the collection, though its the 'get-to=live-another=day,-not-quite-as-bad-as-it-could-have-been' Canadian-style endings here, rather than the 'achieved-our-goals' American-style happy endings. But for all that the stories tend towards the somber, I really enjoyed the book. The writing is excellent, his ideas are original, and its refreshing to read the Canadian version of the genre. And it's interesting to look at the evolution of Schroeder's writing: the man is a genius, one of the best hard SF writers around, so well worth reading his entire cannon. I look forward to his next collection.

View all my reviews
Posted by Robert Runté at Sunday, January 08, 2012 No comments:

Email ThisBlogThis!Share to TwitterShare to FacebookShare to Pinterest
Labels: reviews

Donald Barr was a significant figure in American post-secondary education, having been a professor, Dean, and author of Who Pushed Humpty Dumpty? Dilemmas in American Education (1971) a major book in the 1970s. He also wrote two SF novels near the end of his career, so he's a bit of a role model for me. 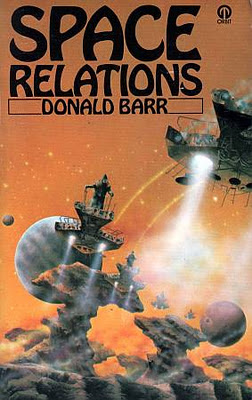 His first novel, Space Relations: A Slightly Gothic Interplanetary Tale is one of my favorites. I've just finished rereading it for the third time, and I almost never re-read novels. But his is one of the novels that comes closest to the one I'm trying to write myself. Having re-read my way through the Miles Vorkosigan series (which stands up very well to rereading) and as much of the Retief and Stainless Steel Rat and Agent of Vega books as I could stand (not nearly as good as my 15-year-old self remembered them), Space Relations was the last of the novels that heavily influenced my own first attempt at novel-writing.

Space Relations is the story of a very minor diplomat who is kidnapped and sold into slavery, but ultimately thinks his way through to escape. But it's way better than that summary makes it sound. It's clever and funny and sexy; an adult version of The Stainless Steel Rat or Retief, and the spy stuff is a lot better because, did I mention, Barr was also a former intelligence officer in the OSS.

What I learned from Space Relations is the importance of not explaining everything at the moment it happens. There's one rather clever bit of action early on in which the hero initiates a bit of a scene: the other characters (and the reader) assume he is just being a bit of a wise-ass out to annoy his captors, but about 15 chapters later the hero explains that this was a key turning point for him because it gave him the information he needed to escape. I've remembered that scene ever since I first read it 25 years ago. And I have therefore resisted the temptation to explain everything as it happens in my own novel, and I'm quite proud of a couple of bits where the reader doesn't get to know what's going on until later. Connie Willis is the other master of the same technique. 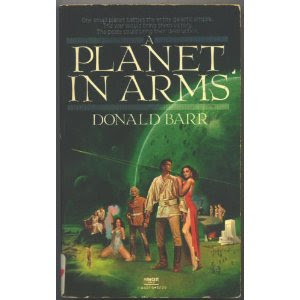 In contrast, I've had three manuscripts across my desk in the last three months in which the first-time novelists have answered the protagoists' questions within pages -- sometimes within paragraphs -- of their having posed them. How mysterious is a mystery that lasts three paragraphs? In each case I have had to point out to the authors that there is no tension in a puzzle that is solved the instant it is introduced. The contrast between these newbies and Barr's first novel made a very strong impression on me.

Unfortunately, Barr's second novel, A Planet in Arms is nowhere as good. I re-read it again too, in my enthusiasm for Space Relations, but now wish I hadn't. A Planet in Arms is much darker: the characters are less sympathetic, much of the action is unpleasantly gruesome, and Barr projects his American cold war politics a 1000 years into the future which is just embarrassing. Large portions of the novel drag as the 'action' slows to debates in the legislature -- more projection of American politics and stereotypical communist villians. In contrast to Space Relations' careful development of a single protagonist, the pov in Planet in Arms is fragmented between a half dozen characters -- the characters serve to tell the story of the revolution rather than allowing the revolution to motivate the actions of some character. I don't feel revolution makes for a good character. To be fair, there are still some (albeit dark) comedic bits, and the spy action is informative, so the book isn't awful...but no Space Relations.

Space Relations: worth seeking out, but it's a one-off.
Posted by Robert Runté at Sunday, January 08, 2012 No comments: