I don't review as much SF as I used to because editing keeps me too busy reading manuscripts to be able to find time to read much else. But I had occasion to drive across Canada this week, and my wife suggested that I play some audio books in the car to keep focused, and to make the drive a little more enjoyable.

[I have also enjoyed the scenery. The Canadian Shield is pretty awesome this time of year: frozen waterfalls along every cliff face, the evergreens frosted in snow, a deer on the road, and I think I spotted a Bobcat at one point. True, everything along the TransCanada around Lake Superior is closed for the season and boarded up, and there were like four other cars on the highway the whole 1,000k, so had the seasonal blizzards I had been warned against actually materialized, I would have been a dead man, not having winter tires, but made it through okay.]

My first choice was Raising Steam the one Discworld novel I hadn't had a chance to read yet, though it has been sitting on my shelf for a couple of years already. You don't need me to review it: it's a Discworld novel, so you already know all you need to know about it. 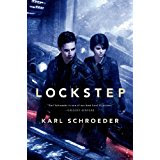 The second was Lockstep, the one Karl Schroeder novel I hadn't gotten around to yet because it is marketed as YA.

Not that I have anything against good YA, but one can only take so many dystopian novels where the young hero(ine) overthrows the corrupt establishment. They are all pretty much the same book/series, lately, followed by the same movie(s).

But this is Karl Schroeder and he has never disappointed me before, so I went for it. And I have to say, Lockstep turned out to be absolutely brilliant.

First, the setting is utterly unique. A completely original idea in a field where really new ideas have become depressingly rare. Schroeder, professional futurist that he is, refuses to write SF that violates the laws of physics (no warp drives!) so he has instead come up with the very first completely logical, probably doable, interstellar civilization without faster-than-light drive. That alone qualifies the novel as "absolutely brilliant". This is the equivalent of when Arthur C. Clarke invented geostationary satellites before there were satellites. Someday, some historian will write a thesis on how Schroeder predicted/invented the lockstep system x number of decades before it came to pass.

But this is Schroeder we're talking about here, so he doesn't stop with just coming up with a fundamentally new concept; he works through all the implications of his invention: all the functions and dysfunctions and unintentional side effects that logically follow from the lockstep system. And a completely credible history of how the system might have evolved organically from humble, essentially accidental beginnings. One of the things that has always attracted me to Schroeder's SF is that the economics of his worlds are always thoroughly worked out, along with the social relations that would invariably follow from his newly invented means of production. (In contrast to most American mass market SF where authors see nothing wrong with, say, having an aristocracy running a post-industrial society. Head::Desk.)He also throws in a couple of completely original, yet oddly credible, new forms of representative government for good measure. His world is so completely realized, that I find myself thinking of a dozen stories I'd like to set in that universe....that, or write a couple of economics papers. And most amazing of all, he manages to accomplish all this without lumps of exposition getting in the way of the story. Instead, he establishes a narrative structure in which it is perfectly reasonable for our protagonist not to know, and to have to figure out, how everything works.

And as is the case with all of Schroeder's novels, underneath the SF is a social critique of our own society and foibles, but so subtly woven into the background that it's never intrusive. His novel, Permenence, for example, is a nice little space adventure; only I haven't ever been able to use an ATM machine since without thinking of that novel and getting really, really mad at the banks' manipulation of microfinances. In Lockstep he provides an insightful critique of multiplayer video games without ever saying a word against them...

The lockstep concept would be enough to make this a must read SF novel, the first really new idea in the genre in a long time, but this is a multilayered novel, and the book really isn't about Lockstep. That's just the setting. The real point of the novel is the conflict between tradition and progress, between a destiny that pushes one from behind, and the hope that pulls one into the future. Well, Schroeder explains it a lot better than that, but this is the sort of philosophical debate that I want my daughters to be reading and wrestling with. What makes this great YA is not that the protagonist is a teen, but that it presents the reader with the really big ideas about life and choice and meaning. And he does it all with a beautifully simple image which is as easy to understand as it is memorable.

And then there is the plot. I was enjoying the usual protagonist-trying-to-figure-out-what-is-going-on mystery one often gets in the better sort of YA, but then Schroeder throws in a twist that I did not see coming at all. I thought I was reading a sociological mystery, but it suddenly turned into a psychological mystery. As with the movie, Sixth Sense, I was so thoroughly surprised, I thought at first he must have cheated; but no, going back over the book, everything was laid out for the reader, if the reader was only sharp enough to catch the clues. I wasn't. And believe me, that doesn't happen very often.

And the romance, of course. But it wasn't even the tiniest bit annoying! It was...life affirming. Yeah, I know! But what can I say? It felt authentic, and I really enjoyed it!

And did I mention the cute space cats? Well, okay, not actually cats, but you get the idea. The book has everything.

And yes, if you really insist, Lockstep is indeed novel about a rebellious teen recognizing the corruption of the current social structures and tearing them down. But this time it's different because its, you know, really good! And because instead of just overthrowing the corrupt status quo, our hero actually comes up with solutions, takes responsibility for making things better.

In a word, Lockstep is: flawless.

Posted by Robert Runté at Thursday, November 24, 2016 No comments:

The True Story of Hamlet and the Danes 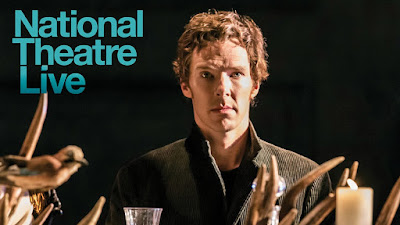 Saw Benedict Cumberbatch version of Hamlet yesterday. It was breath-taking. Cumberbatch's portrayal is the best Hamlet I have ever seen, and the rest of the cast/production up to that same outstanding standard. Very, very impressed.

I could not help but notice that the only one who survives to tell the tale is Horatio, so we really only have HIS version of what happened. Which is ludicrous in the extreme. So here is what I think went down:

Fortinbras wants to invade Denmark to recapture the lands lost by his father. He gathers an army and is ready to march when the King of Norway stops him, at Denmark’s request. So Fortinbras makes up the ridiculous excuse that he just wants to march through Denmark enroute to Poland, though it is obvious to everyone that the targeted Polish territory is worthless--so clearly just an excuse to enter Denmark with his 20,000 troops. Then Fortinbras sends his agent Horatio to Denmark where Horatio murders the entire royal family and the chief minister and his daughter and son (the only witnesses) and invents this completely ridiculous story of how he--Horatio, friend to Hamlet--helped uncover the murder of Hamlet’s father by Hamlet’s uncle and the uncle’s marriage to the queen (Horatio thus undermining the legitimacy of the then current rulers) and how the current king’s attempt to murder Hamlet led to the deaths of the rest of the royal family and advisors. Thus, when Fortinbras arrives (conveniently timed to the exact moment to find the entire royal family dead of poison, the chief minister stabbed, and his daughter drowned) Fortinbras is well positioned to take over Denmark. With all the legitimate claimants to the throne dead simultaneously, and backed by a mobilized army of 20,000 already in place in Denmark with the Danes disorganized, rulerless, and the royal line discredited, Fortinbras is the only winner in this scenario…

What other possible explanation for events is there? Because clearly, Horatio’s versions of the events is so over-complicated as to be completely unbelievable.