Ned, What's Under Your Bed?

...is a play for children by Jeremy Mason which had its premiere performance today. 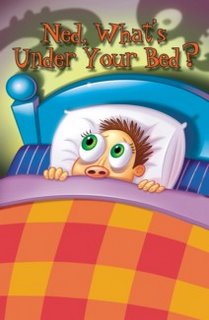 I enjoyed the performance immensely, which I say quite aside from the obvious bias that Tigana was cast as one of the bedbugs.

I was already impressed with Mason (and fellow actors Andy Jenkins and Jamie Dunsdon) as instructors at the Empress Theater summer drama camps, and as writers/actors in the Empress Theater's summer series plays. I had been struck by how much more effective this camp had been for Tigana than some of the others she had attended. Part of that was the camp's structure, which incorporated the children's performances into a Vaudville night along with skits and musical numbers by adult performers -- so that kids got to perform in front of a real paying audience, rather than just a room full of relatives, as is the usual conclusion of these sorts of summer camps. Furthermore, Tigana had the opportunity of going to the Empress Theater's summer plays and seeing her instructors actually acting which allowed her to "connect the dots" in a way she wasn't able to with the other camps, where the instructors were just another group of "teachers" to her. But mostly I was impressed by the synergism of the group of young actors/writers/instructors that Stephen Delano had managed to recruit for the Summer program. You could almost see the creative sparks flying between these people, and I loved that Tigana got to see and benefit from that.

So when Jeremy invited Tigana to take part in this play, we were delighted. This was Tigana's first opportunity to be in a real play run with multiple performances and to perform in a theater in Lethbridge. Indeed, Tigana would be in the children's play that we normally attend as part of our Boxing Day afternoon tradition.

Watching Jeremy rehearse the kids (16 of them), I was again blown away by what an exceptional teacher Jeremy (along with the rest of his gang) is. As a Faculty of Education professor, I have unrealistically high expectations teachers, but Jeremy is a natural. He had structured the play so that he was always with the kids when they were on stage; he explained how each scene worked in the sort of concrete ways I struggle to get my student teachers to aim for; and he has this natural charisma that makes kids love him. It was a pleasure to watch.

So...the end product this afternoon lived up to my expectations...it was a great kid's play, well performed by all. I was, of course, most interested in Tigana's performance, but enjoyed the play and the acting for its own sake as well. Most amazing of all, the play kept Kasia's (now age 3) undivided attention... something even a new episode of My Little Pony has yet to succeed in doing. And Kasia totally 'got' the play -- she kept saying to her mom, "That man is really mean!" whenever the villian (ablely played by Andy, who has I believe one of the best evil laughs in the business) was on stage.

All that remains is to see how Tigana copes with 9 performances of the same play, including several dates where she is doing both the matinee and evening performances -- a very different experience than the single school or end of camp performance. So far, so good -- she has already noticed the difference between performing for a full audience this afternoon, and a much smaller audience this evening....we subsequently had a long discussion about 'energy'. I am so proud of Tigana, and so pleased with Jeremy and his crew that I my gushing at everyone involved has become positively annoying... I'll have to try to tone it done as the play continues....
Posted by Robert Runté at Tuesday, December 26, 2006 No comments:

My daughter's school organized a skating party during school hours in the run up to Christmas break. I volunteered as one of several parent drivers for this field trip, a short car ride to the nearby rink. My daughter, and others, had to borrow skates from parents who loaned pairs their own children had outgrown, or not yet grown into; the school promised to provide hockey helmets for those who did not have them, which included our daughter. (School Board regulations required that every student have a hockey helmet; bicycle helmets were deemed insufficient.) My daughter had had skates, but outgrown them and had chosen to do drama and gymnastics this term, rather than skating lessons, so we hadn't gotten around to replacing them.

When we arrived at the rink, I helped my daughter and another girl into their borrowed skates, then went in search of helmets. The rink staff pointed out that they did not have a key to the school locker that contained the helmets; the schools staff had assumed the rink would have a key. The rink staff produced a smaller bag of helmets for a few lucky kids; others came with their own; but my daughter and about 15 others were left standing on the sidelines watching the rest of their schoolmates skating. One of the parents (a male) approached the teachers with the problem. One of the teachers volunteered to drive back to the school for a key, but we were already 15 minutes into a one hour skate time, so calculating round trip and the time likely required looking for the key at the school, this seemed impractical.

Where upon another male parent said, "No problem, just give me a minute to go out to my truck." I'm wondering, who drives around with a truck load ot hockey helmets, but I figured, maybe he was a junior hockey coach and just happened to have the right size heluts on hand.... But no, he returns less than a minute later with his tools, and calmly proceeds to drill out the lock.

I have to admire the pragmatic logic of his approach...here is a guy who gets things done!

Ten seconds later, the helmets are handed out, my daughter and her friends hit the ice, life is good.

But I'm left with the realization that I could never be that guy. I mean, quite aside from the fact that any attempt on my part to drill out a lock would inevitably end with at least one (and possibly more, depending how close the spectators crowded in) ambulance being called, I suspect I lack the sort of male self-confidence that would allow me to drill through someone else's lock. I'm more like the guy in Dr. Strangelove who can't bring himself to break into a Coke machine to steal a quarter so he can use a pay phone to make the call to stop WWIII because, well, breaking into private property and stealing iwould just feel wrong.

Part of me is still astonished that no one said, "Hey, what are you doing? You can't drill out an official lock" but of course nobody did because the guy just acted like he had the authority. Nobody questions that kind of confidence. With that kind of air of self-confidence, he could have walked into a bank, gone up to the vault, and just drilled away, and the only comment would be, "Hey, can't you do that any quieter?"
Posted by Robert Runté at Saturday, December 23, 2006 No comments:

Meanwhile, Kasia is impatiently awaiting the arrival of Santa. Having a three-year old around the house makes Christmas magical in a way it hasn’t been since, well, since Tigana was three. I love seeing the season through three year old eyes.

But I have to confess that when Kasia was still awake at 10:00 on Tuesday, after two hours of various unsuccessful bedtime strategies, ending with a round of pathetic sobbing/begging on my part, I kind of lost it, and said (Lord forgive me!) “KASIA! If Santa sees you awake at this time of night, he’ll take you off the “Nice” list!

Kasia stops dead in her tracks, turns around and throws herself onto her bed, clearly devastated at the thought of earning a place on the “Naughty List”.

Overcome myself with guilt at such a cheap tactic, I quickly reassure Kasia that – if only she would go to sleep right now – there might still be a chance that Mom and I could intercede with Santa on her behalf and explain that Kasia has been nice all year, and really, should still be thought of as “nice”. It may not be too late, if only she will sleep now. (I feel despicable, but I really need sleep myself by this time.)

At which point Kasia turns to me and sobs, “It wasn’t me dad! It was Doego!”

So has anyone else noticed Babylon 5: The Complete First Five Seasons" on Amazon? Does the use of the phrase "first five seasons" mean that Amazon knows something that we don't, or just that the clerk doing the webpage doesn't know enough that there were only five seasons?
Posted by Robert Runté at Friday, December 15, 2006 No comments: 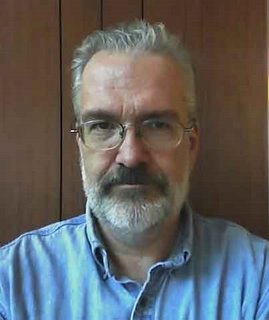 Posted by Robert Runté at Thursday, December 07, 2006 No comments:

Email ThisBlogThis!Share to TwitterShare to FacebookShare to Pinterest
Labels: Robert 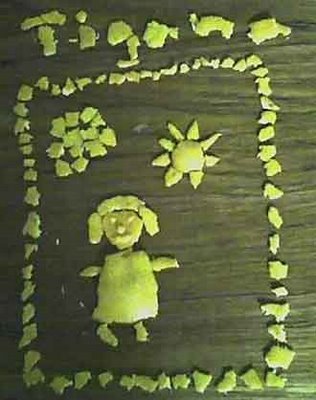 My 8 year old daughter, Tigana, finished the orange I'd given her for bedtime snack, and then sat playing with the peel as I told her her nightly bedtime story. This is the result.
Posted by Robert Runté at Thursday, December 07, 2006 No comments: