Our House from Space

Ours is the house on the lower left. I can actually pick out our garbage can (grey smudge, middle right margin). Interesting view, but little worried about privacy issues. Not that you can tell too much from our picture, but the looking at the larger picture (from which this was cropped) is the first time I knew the neighbour two doors down had a pool.
Posted by Robert Runté at Sunday, October 19, 2008 No comments:

Email ThisBlogThis!Share to TwitterShare to FacebookShare to Pinterest
Labels: Home 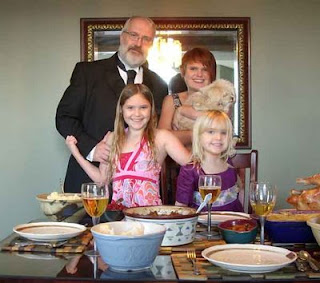 Email ThisBlogThis!Share to TwitterShare to FacebookShare to Pinterest
Labels: family

So for the last four weekends I've gone up to Edmonton to sort through Doug's stuff and get his condo(s) ready for sale. Counting the six hour trip each direction, I manage to put in three 18 hour days each time, so it is pretty exhausting.

It is also kind of depressing disposing of all his stuff, much of it treasured family memories. But Doug had a lot of stuff, and neither my family nor my remaining brother have need or space for all this material, so in the end, most of it has to go. In keeping with what I am sure would be Doug's wishes, I tried to ensure as much as possible went to good homes. So the Provincial Museum took three boxes of stuff (they told me it is unusual for them to take even a single item from an estate, because they have only limited storage and so have to be pretty picky -- but Douglas had not only saved a lot of the everyday things most people through out, but had kept detailed written records of each purchase, giving them the providence for various suits and household items, which is very rare. "We live for finds like these," the Director told me.); the University of Alberta took 78 boxes of books for the library; the Edmonton Public School Board took 23 boxes of my brother's papers for their archives; the ATA took two boxes for their archives; two boxes for the UofA archives; four boxes for the City of Edmonton Archives; and I have two more for the Edmonton Public School Board of stuff I found after my initial shipment.

After spending about four months sorting, packing and donating everything I could to these various archives, and throwing out stuff no one wanted (e.g., his extensive video collection -- but just stuff off TV, not prerecoreded), these last few weekends have been about taking truckloads to Value Village (an okay place to recycle unwanted furniture, clothes, small appliances, etc.) and getting the guys from 1-800-gotjunk to haul stuff away the big stuff. But it is killing me to watch the couch and chair from my childhood being dragged away to the dump, even though these are not in sufficiently good shape for even Value Village to want.

One of the archivists who came to pick up stuff (my brother's Gestetner duplicating machine among other things) spent about an hour going through helping me identify what was antique and what was just junk...and recommended an antiques dealer I could help me take care of the good stuff. But when I phoned the antiques dealer, turns out that he had essentially retired and was now only interested in those sorts of pieces that you see on the Antiques Road Show. He spent a long time on the phone with me explaining that all the antiques dealers in Edmonton were gone out of business and that there was no one left in Calgary either. The problem is that the value of furniture has fallen so dramatically over the past decade that dining room sets that used to go for $3600 to $4500 were now lucky to sell for $400. And because the value had dropped so preciptiously, the dealers have had to raise their commissions to compensate to make it worth their while to sell pieces -- with the result that it often cost more to truck a piece to auction than the owners recovered at auction. So the market has essentially collapsed.

The problem, of course, is that my brother's generation are all passing or moving into nursing homes, leaving their antique furniture as a glut on the market. For example, the caretaker in my brother's building told me that she has fabulous furniture, because people in the building keep moving into nursing care, and their relatives have to clear out their condos in a weekend or two, and so keep offering her diniing room sets or living room furniture, and she and all her married children now have all they can take. So people literally cannot give this stuff away. (She did take my brother's car -- a 1982 Toyota Tercel -- off my hands for one of her sons, though.)

I'm dreading what to do about emptying my Mom's place (which is up next, since she blind and bedridden so never leaving the nursing home again) because she had the majority of the "good stuff". I'll try phoning around to the relatives to see if anyone wants any thing, but the truth is, most people don't have the room for other people's antiques, and even if they did, shipping costs on the larger items may simply prove prohibitive.... A generation or two from now, these items will again no doubt be in high demand, but who has space to store them in the meantime. It is a dilemma.

Anyway, I was working away diligently this Sunday packing up Doug's place when I kept heard noises that sounded a bit like a group of people talking over the sound of the podcasts I was listening to on my ipod. But I'd check the spyhole and there would be no one out in the hallway, so I'd shrug, and get on with my cleaning. But the noises get getting louder, so eventually I figured out they were coming from outside. And this is what I saw: 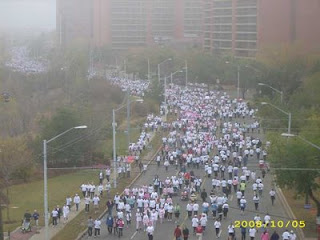 Doug's condo is just near that end of Jasper Ave where the Cancer Run turns around and comes back on the other side of the road, so what I was hearing was the first runners to complete the first leg of the circuit turning round and greeting people coming the other way.... By the time I got my camera, there was quite an impressive crowd going by!

I paused in my work for about ten minutes to watch and I could not help but be struck by how powerful a sense of community and solidarity presented by such a massive gathering of like-minded people. Of course, the next thing that occured to me is how sad that the only thing Edmontonians would turn out for in such massive numbers is the Cancer Run, rather than, say, political protest. Yeah, everybody, let's protest against Cancer! That's a tough one to rally the troops for! But really, if this many people turned up on the legislative grounds over anything, the next day, the law would be changed.... 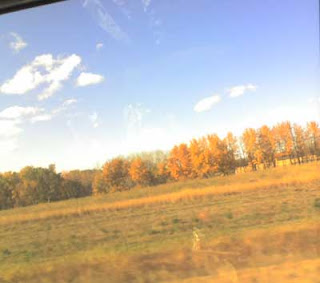 Monday, the 1-800-Gotjunk guys came and hauled away the last of the stuff from Doug's two condos, and I set off for home. The only two redeeming elements of the weekend was that the six hour trip home I got to listen to my own CDs for a change (no Barney for Kasia, no Canadian Idol winners for Tigana) and to admire the scenary. The Edmonton - Lethbridge corridor is painfully boring to drive -- once you've seen one set of cows, you've pretty much seen 'en all -- but the last two weekends have been glorious fall colors, and surprisingly attractive. The two photos below (snapped with my cellphone out the car window as I was driving, so no chance to even aim, let alone compose decent pictures) give a poor indication of how beautiful and peaceful the drive really is this time of year. Next time I go up, I know it will all be bare grey trees and flat rolling countryside, but at least this time I got to decompress a bit on the way home from these physically and emotionally exhausting weekends before having to throw myself back into teaching. 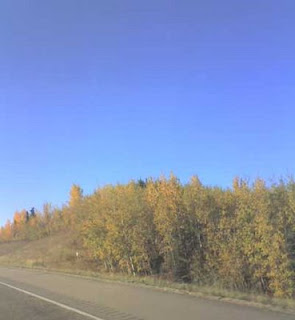 Posted by Robert Runté at Thursday, October 09, 2008 No comments:

I did a Harris online survey awhile back that asked about my ipod usage, and it was an excellent example of bad survey design, because after I answered that I had 29 days worth of material on my ipod, the survey asked me to identify what % of that was devoted to which genre of music, and the system crashed when I entered "0" for each category. Because at the moment, I have no music whatsoever on my ipod; it's all podcasting. Stupidly, the survey assumed ipod usage = music, and there was no "podcast" or "talk-radio" or even "other" option available. Good example of bad design: you have to know all the possible options before sending out a survey.

One reason I have 29 days worth of material is that I seldom get a chance to listen: I'm either working my day job or looking after the kids; and even car time tends to be devoted to the kid's radio choices, rather than my own. So the one nice thing about spending all these weekends cleaning Doug's condos was the opportunity to listen to some of my podcast backlog on my ipod as I worked. This last weekend I was able to catch up with the entire run of:

Quirks and Quarks (CBC) best science show around (and thanks to podcasting, I can listen to most of the world's English language science shows, so I know whereof I speak

Big Ideas (TVO) Like CBC's ideas, but better, because it's just the one speaker rather than soundbites gathered by a producer/interviewer on some topic. Lecturers are often huge names in their fields, and often household names. Always engaging, often profoundly informative.

Wait, Wait, Don't Tell Me! (NPR) a hilarious news quiz show with the likes of Paula Poundstone...show interviews celebrities about topics they can't possibly know about (segment is called "Not my Job", while panelists try to identify which of three news stories is the true one, or complete limricks based on news items or etc. Very often very very funny.

Comedy Factory (CBC) Recylced comedy bits from all the CBC newshows etc that use comedy bits (e.g., The Current, DNTO, etc.) Tends to be short show (15 minutes) and ranges from mildly amuzing to hilarious.

I'm also a big fan of:
TedTalks World's top thinkers on infinite range of topics -- e.g., fascinating talk on setting up stock exchange commodities market in Ethiopia to what's wrong with schools to menes to whatever

Spark (CBC) Interesting show on cyberculture, if you're into that
John Cleese Podcast (irregular on again off again show, but hey, it's John Cleese talking about stuff. Some brilliant stuff, some longwinded rambling.

Anyone out there have any other suggestions for "must listen"s.
Posted by Robert Runté at Thursday, October 09, 2008 No comments: