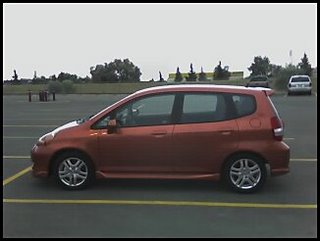 This is, in fact, my first actual NEW car, never having had the cash before for anything other than hand-me downs. My last two cars were from my Father-In-Law, and the one before that was purchased for $800 from a sympathetic co-worker. (Okay, the word "cash" may be a bit inaccurate here since we are buying entirely on credit, but you get the idea.)

The car is a Honda Fit, which is new to the North American market, but has been selling in Japan and Europe as the Jazz for several years. The "Fit" name is undoutbably to emphasize that it has a roomy interior, even though it is a subcompact. I confess myself surprised when I actually fit into it, since whenever we have rented cars, I've had to specify the high end models because at six feet, 250lbs there was never any possibility of my getting into the compacts. But damned if there isn't more head room in this new Honda than in the wagon we were driving before. It feels as roomy as our Van, for crying out loud.

Luggage space appeared to be a problem, but as a test we gathered up all the suitcases we'd actually used on our last trip to Edmonton down to the dealership to see how many we would have to give up, and darned if they didn't all fit in okay. Miracle of design engineering, because you would swear this car is bigger on the inside then the outside.

I hadn't wanted to buy a new car, but our current vehicle is on its last wheels. The transmission bumps with every change of gears, so probably only has a month or two left in it, and the cost of replacing that far exceeds the $1000 the insurance company tells us our car is now worth. And there are a myrid other problems, like the passenger door falling apart, something leaking out the front end, etc. etc. etc. Even so, I had wanted to wait until February to buy a new car, since I've always heard you get a better deal in Feb, but the deterioration on our current ride had reached the point where I was only putting in half a tank of gas at a time because I wasn't convinced it would last another full tank.

I love our new car. It handles like a sports car, it has a kicking stereo, and it parks unbelievably easily. Suddenly, driving is fun again.

So then the first order of business, according to the wife and kids, was to name it. Mary nominated "Frisky" because it is the same color as her late Aunt's old Colt, a car with very fond memories for both of us; Penny was an obvious alternative because it is copper color (officially Blaze Orange, but it matches the new penny in my pocket); and of course I suggested and Tigana seconded "Tardis" because it is, did I mention, larger on the inside than the outside. Thus we get today's column title, and the compromise long form, though Tigana and I like the idea of just going with Tardis -- as in, "Hey, Tigana and I are just going to hop in the Tardis to go down to Starbucks for a couple of Chai, but we'll be back before we leave!"

The other thing that has struck us, is how much we do drive. One doesn't normally pay much attention to the odometer, but one can't help noticing when you put the first 50K or 200K or etc on the car, and these milestones (kilometerocks?) have been coming a lot faster than we would have expected since we are only a couple of K from work. But driving the kids to daycare/school, going shopping, etc, apparently takes a lot of driving in a week. But at least for the time being all that driving is FUN.
Posted by Robert Runté at Sunday, September 24, 2006