Robert: One of the things I liked about Marseguro was the complexity of the main, and even a few of the secondary, characters. (This is in sharp contrast with a lot of SF where the viewpoint character is essentially flawless Hero, or at best a Peter Parker flawless Hero-with-angst.) Your viewpoint characters are either slightly damaged individuals or ordinary people (well, aside from the whole gill thing) who have to try to rise to the occasion. And every time they succeed, you keep raising the bar on them for the next task. This makes for very engaging characterizations.

So my question is this: if you were casting for the movie version of Marseguro, who would you have playing which roles?

Hmmm. Richad Hansen...how about Nicolas Cage? Seems like an ordinary guy but can do extraordinary things when he has to.

Emily Wood...Catherine Zeta-Jones comes to mind, except she's too old. Someone like that, though. I don't see enough movies any more to be able to name somebody more in the correct 20ish age range.

Samuel Cheveldeoff...John Malkovich would be interesting.

Robert: Hey, I was thinking Nicholas Cage for Hansen too!

But does your wife know about your thing for Catherine Zeta-Jones? (Oops! Nevermind...that wasn't an interview question!)

In both your SF novels, the protagonists start out with one point of view / set of prejudices, and end up with a very different set of understandings / positions. You've already suggested that character growth is an underlying principle in your writing, but the particular pattern that has appeared in your books is a archetypal Canadian version -- the hero who sets out to achieve one set of goals, but ends the book somewhere entirely different. I don't think any author ever sits down and says, "I'm going to write a Canadian SF novel" and restricts themselves to some textbook's definition of typical Canadian themes, but, upon reflection after the fact, do you detect anything distinctly Canadian about your writing?

Edward: Huh. No, I've never thought of it in that terms, and I generally vehemently oppose the notion that there's anything distinctly different about science fiction by Canadians versus science fiction by Americans: I don't like pigeon-holes and I prefer to think in terms of individual authors rather than national identities.

Besides, I only just became a Canadian citizen: I was born in New Mexico and we moved to Saskatchewan from Texas when I was eight. I went to university in Arkansas. Most of my life I've been an American only, and proud of it, much to the horror of various Canadian friends who seem to think being an American should be something to be ashamed about. Since I've lived with that attitude my whole life, I generally let it go, but it does rankle.

However, now that I'm married to a Canadian, and the father of a Canadian, and since I have, after all, lived here longer by far than I lived in the U.S., I decided I should be a Canadin. But I'm a dual citizen, so I'm still an American, too.

Maybe that's the process you see in my characters: starting out with on point of view/set of prejudices (purely American), and ending up with a very different set of understandings/positions (becoming Canadian)!

Robert: Works for me! Clearly, Canadian themes have taken over your subconscious!

[ I'd argue that analyzing cultural differences is valid because individuals are all products of their environments -- hey, I'm a sociologist in my day job -- but that one has to be careful not to over do it. People who try to dictate particular themes or forms to authors (e.g., Soviet Realism, certain Canada Council juries) are idiots.]

So my next question was going to be whether you ever had to consciously edit yourself to sell to the American market, but the answer there is pretty obviously a 'no'. So let me ask instead, how did you end up choosing DAW as your publisher for Maresguro (and Lost in Translation)? And what has that experience been like?

Ten years ago, at least, I wrote Lost in Translation, a novelization of a short story that I'd sold to the premiere issue of TransVersions magazine in, I think, 1994.

Then, in 2004 or 2005, I got an email from John Helfers, who edits at Martin H. Greenberg's Tekno Books, which packages science fiction titles for the Five Star imprint. Five Star publishes hardcover editions, but really only sells to libraries; indeed, the books are library edition hardcovers, which means that they have the cover art printed right on the hardcover, not just on the slipcover. John wanted to see Lost in Translation. I sent it to him, he liked it, and in 2005 Lost in Translation came out in a Five Star hardcover. 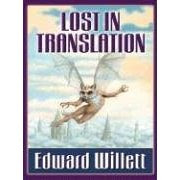 Cover of the Five Star edition of Lost in Translation

I was toying with, but hadn't yet acted on, the idea of dangling the published book in front of agents to see if I could get one to take it on in the hopes of selling the paperback rights for me when, one very fine day, I received a phone call from John Helfers, who told me Martin H. Greenberg wanted to talk to me. Which he did.

As Greenberg explained it to me, DAW had a "hole" in their publishing schedule and needed book to fill it. Since Greenberg has edited a number of anthologies for DAW, and they knew about his Five Star books, they asked him to send along some of the books published under that imprint for them to consider for paperback publication. Which he did and, lo and behold, DAW picked mine! (So really, I didn't pick DAW, DAW picked me.)

With that offer in hand, but before signing the contract, I went in search of a new, improved agent. Ethan Ellenberg responded the quickest and agreed to take me on. We agreed that my next move should be to offer DAW two synopsis for my next book after Lost in Translation. One was a sequel to Lost in Translation, while the other was Marseguro. The response was, "Which one do you want to write?" and after talking it over, Ethan and I agreed that it was better to go with the new idea rather than a sequel to a book that we didn't even know at the time whether or not anyone would like.

It was the first time I ever sold a book based only on a synopsis and then had to actually write the thing: like most starting-out novelists I was used to writing a book and then shopping it around for months and years in the faint hope someone would buy it. It was also the first time I had strong editorial input after I turned in the initial manuscript: none of my other fiction publishers were large enough/interested enough. Sheila Gilbert and I spent a couple of solid hours on the phone talking about the manuscript, and at the end of it, I went back and beefed up the story by almost 20,000 words, particularly in the areas of characterization and motivation and the political situation on Earth. A fairly major plot point also made its way into the story during the rewrite, and a good thing, too, because it's a major element of the sequel!

I've enjoyed all my dealings with DAW thus far. They've been great.


Robert: Fascinating! As part of the discussion of publishers, I usually ask authors what they think about the cover art put on their books. I'm guessing you're probably pretty happy with your covers, since both books look pretty good, but I wonder how much input you had into the coverart.

Edward: I had a bit. I suggested scenes that I thought might make a good cover, and in the case of Marseguro, provided some extra description of some of the things that might appear in those scenes. I didn't know what Steve Stone would do with it until I saw the finished product, though, and yes, I was very happy with them both.


Stone is a top-notch cover artist whose art has also graced books by the likes of Stephen King and George R.R. Martin. It'd be nice if some of their sales would rub off on me by association...