My 10 year old daughter follows Canadian Idol closely, hoping to go for it herself when she is old enough; so when UofL student Theo Tam made the final two, Mary sent me to line up for tickets for the hometown viewing of the final show. The university lent its new gym for the purpose, and we showed up early enough to be among the first through the door. Tigana ran ahead to get good seats for Mary, Kasia and I even though it was 90 minutes before the show and the gym was not yet crowded. I was pleased with Tigana’s choice of the front seats in the second section, a good spot to see and be seen, and about the best we could have gotten without being the very first in line. But after about 20 minutes the producer came over to us and asked if we would move to the section signed as reserved for Tam friends and family. We were pleasantly, though not very, surprised: yet again, the ‘cuteness factor’ had worked in our favor, as the producers selected Kasia and Tigana to be front and center for the broadcast. Kasia, is well, Kasia, and Tigana had made the sign seen here. So, who could resist?

In the end, Tigana could be seen briefly waving her sign; and both local papers took shots of both kids: 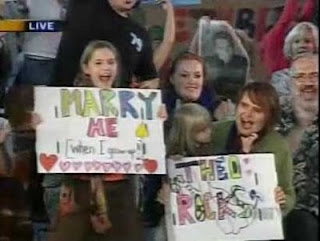 This CTV video (click on photo above) shows clear shots of Tigana and Kasia with their signs at about 36 seconds in (Mary and I are also visible on the far right). Tigana also appeared near the end of the actual Idol show during one of the cuts to Lethbridge.

Tigana in Calgary Herald (and click on "next" for another shot of Tigana)
Front page of the Lethbridge Herald Kasia can be glimpsed in the upper right of photo.

For myself, I was fascinated to watch how the cameramen, stage manager, and local talent handled the production -- they seemed relaxed (in spite of the show being live), professional, and pleasant -- and particularly how they organized the crowd to appear larger than it was, to scream on cue, and so on. Quite interesting.
Posted by Robert Runté at Wednesday, September 10, 2008