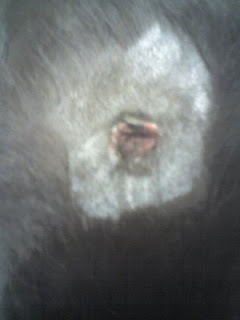 So I came in from my walk last night and turned around to see this on Jackie's hip. We phoned the vet immediately, even though it was after10:00 already; and then we tried to figure out what the hell had happened while we waited for the vet to call back.

Mary and the kids had been playing with Jackie for an hour before I took Jackie out for her evening walk, and hadn't noticed anything, so it was pretty obvious it had to have happened on the walk. But I couldn't for the life of me figure out how she could have acquired such a wound while on a four foot leash without my noticing. I rewalked the route in my mind's eye, and while there is one fence on our usual route that has two nails sticking out of it, we always give it a wide birth; and while Jackie had had one of her freakouts barking at one of the neighbour dogs (most days she's okay with his barking from behind the fence, but every once in awhile he must bark something especially rude, because she pulls and jumps and goes nuts, as on this occasion) I could not see how my pulling on her leash could have resulted in a puncture wound like this.

Mary's first thought was it was a gunshot wound. This is a bit paranoid, but only a bit because we had a candidate in mind who is crazy enough to think shooting our dog would be funny. But I would have heard something, or seen someone, surely. Even a BB gun would have made an audible piff. But then, worrying my way through the walk again and again, I suddenly remembered that Jackie had -- on one of the quiet stretches of our route where there are no other dogs --jerked around as if shot, and kept pulling to go back, starring at something. I remembered my saying at the time, "Jackie, there's nothing there, you're jumping at shadows". I thought nothing further of it, but now, in retrospect, I wonder if I had allowed Jackie to be injured without my even noticing.

The more I thought about it, the more I became convinced that must have been the moment -- only a block or so before I found the wound, and Jackie had been convinced that there was something there -- what if I had missed some kid in the bushes with a BB gun, and ignored my dog's attempt to warn me? Or even if the gunshot wound seemed far fetched, what if there was some dangerous object sticking out of the lawn or a fence or one of those old garbage can sheds? I let my dog get hurt, and I hadn't even noticed or listened to her. Paroxysm of guilt that such a thing should happen on my watch.

When the vet didn't phone back within the hour, we phoned a second vet who agreed to see Jackie immediately. She was really great, even though it was after midnight when we finally brought Jackie in. She told me that it wasn't a gunshot (which was somewhat reassuring -- it means I don't have to start driving to another neighbourhood for nightly walks); and that it looked older than the timeframe I had indicated. Once she shaved away Jackie's fur, it was obvious the puncture was from above, rather than from the side. The vet nominated a dog bite or a tree branch.

So then it was Mary wracking her brain, trying to think what could have happened. The day before she had taken Jackie for an off leash run, but Mary was positive there had been no dog fights or any other hazards. And how could she not have noticed the wound? We couldn't see how it was possible.

Eventually, we came up with our current theory, which is that there was a barbed wire fence at the off-leash park, and it is remotely possible that Jackie ran into a barb which sliced her open, but that the torn flap of skin remained over the cut, making it invisible -- and that when I had yanked Jackie back off the road during her freakout on our walk the next evening, she had tumbled onto her bum, and that was what rolled back the loose flap of skin, reveaing the wound. It makes sense to us, but we will never really know for sure. I certainly have become very paranoid about hidden obstructions on our night-time walks.

So, the vet treated Jackie, gave her the 14 day antibiotics, gave us doggie equivalent of Advil, and the dreaded "cone" and sent Jackie home. I was very pleased with the vet's bedside manner, very impressed with Jackie's stoic acceptance of the pain, though a very sad picture. Being the hopeless softies we are, he hate having her in the cone so have tried protecting the wound by dressing Jackie in shorts and T-Shirt, but that's only good while we're there to watch Jackie closely -- she undoes the clothes if we aren't. So it will have to be kennel and cone for times we're both out, much as it pains us to see Jackie like that.

Anyone have any experience dealing with these kind of puncture wounds? In their dogs, I mean.
Posted by Robert Runté at Tuesday, March 17, 2009