The Last Cup of Tea

Now that Mom is over 100, she had become increasingly frail.

She has become so thin, that her skin is essentially transparent, like those "living skeletons" used in biology classes: her bones and blood vessels, and what little muscle mass remains, are all clearly visible. The cell phone photo below doesn't really capture the effect, since it's hard to tell that you're looking through the layer of skin here; but you can maybe get a sense of the skin if you look at the wrinkles, which are like ripples on the surface of a pond; you only see the medium you're looking through when something disrupts the surface. Or look across the top of the fingers, you can sort of see the gleam of a reflection floating just above the bone; that's her skin. I can actually watch the blood flowing through her arteries/veins. 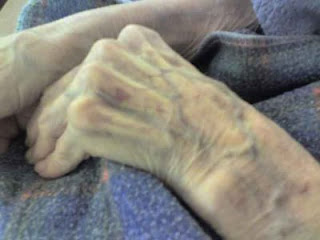 
What makes this particularly disconcerting is that I also had the experience of watching the blood stop flowing. I was, as is my custom when visiting her, holding and stroking mom's hand. This seems to provide her with some comfort. But on one occasion I happened to glance down as my thumb crossed various veins and arteries, and realized that I was cutting off the blood flow in each one in turn. I could actually see the blood stop moving, back up, and the color draining away 'downstream' as the supply was momentarily cut off. And I wasn't pressing hard; the lightest touch imaginable. That left me in a bit of a quandary, pitting psychological support against blood supply.

Then today, I happened to be watching one blood vessel as she crooked her fingers to take the cup handle to drink her soup, and I watched the blood in one of the vessels struggle to climb the 'hill' created by the bend, and not making it: little droplets of blood would climb half way up, like cars on a train, but roll back at the last moment.... It was unnerving. I also noticed dozens of little bruises all over, which I deduce are caused by blood vessel failure. (Quite aside from the fact that I have complete faith in the staff at her nursing home, the location of these bruises are completely wrong as 'grab points' or bed sores, but adjacent to what appears to be the end of a blood vessel.)

Similarly, whereas I used to rub her neck for her whenever I visited, there simply isn't any detectable muscle mass back there for me to message any longer. Looking at her arms and legs, the increasingly number of bruises, and her general frailness, I worry that her time is running out; but listening to her chatting away and laughing at my jokes, I think she she's good for another four years.

Much of what she has to say doesn't really make sense, at least not as part of our consensual reality. It is perfectly consistent and reasonable if one is prepared to accept that my mother, like the hero of Slaughterhouse Five has come loose in time and is moving back and forth through her life; or that there is an afterlife, and it consists largely of visiting with friends and relatives. Whenever I ask what she was doing today, she answers, "Not much of anything today. I was up late visiting with _____ (fill in the blank -- today it was our wonderful neighbours of 30 years ago, the Whitbreads) so decided to just take it easy today." Sometimes this comes across as her remembering some event from years before; more often, these seem to be current visits with those from beyond the veil. It's hard to explain exactly, but the visits sound to me as accurate projections of how people would have interacted had they been all gathered together in the same room, though most of them had never met in this world, at least not as adult contemporaries, being from different generations. Mom is now constantly with her mother, her sister, my brother, and sometimes one or more of her brothers. These are the people she talks with while I'm with her, and to whom she often attempts to pass the cup I have just put into her hands. "Tea Evie?" she'll ask. Significantly, she never sees anyone in this group or as visitors come to call on this group, who are still alive. When she talks about my visits or those of Ron, my other surviving sibling, it is quite clear that she is referring to our visits to her in the nursing home, and not to the group in the Garden (behind her mother's house in 1948), the usual setting for those visiting in the beyond. If mom were just "confused", wouldn't one expect her to mix up the quick and the dead?

One purpose of my visits serve is to get my mom a cup of tea. She likes a cup of tea of an evening, but it is not included in her official nursing home diet, so she only gets it when I'm there. She is supposed to be drinking an 'Ensure' type drink, which they thoughtfully warm for her, and which she seems to quite enjoy; but ultimately, it's not her beloved cup of tea. I realize that the tea fills her up without providing nutrition, but one has to balance nutrition against the psychological value of a really good cup of tea. And I do use one of her protein drinks as the 'cream' substitute, so I do get something into her. This trip, however, I was forced to acknowledge that the logistical issues had become untenable, and it was with great sadness that I realized that this might well be her very last cup.

I'd noticed on my last few trips that Mom was having increasing difficulty with sitting up straight: she now perpetually leans 35 degrees to the left. No amount of pushing her upright seems to help; she immediately re-adjusts to what must seem level to her, and actively resists attempts to help her hold her cup straight, complaining that I'm going to spill the contents to the right, when I manage to hold the cup level for a second. I've heard about people who've had strokes being skewed from the vertical like this, and given that mom is totally blind, she can't even use visual cues to keep herself aligned. This isn't a huge problem for the staff or I spooning in her pureed dinner, and she can usually manage her cup of (usually quite thick) soup by herself, though some days as much lands on her apron-sized bib as in her mouth, dribbling off the left edge of the tilted cup. But tea is a different matter entirely. Mom likes it hot, and being significantly thinner than the soup, her trembling hand and bad angle inevitably send near scalding tea splashing onto, and soaking through, her bib. Doubling the layers of the bibs helps a bit in terms of keeping her from getting burned, but ultimately, the experience is no longer a calming one. She is aware of the tea dribbling off her lips, and her hand feels around for the lake of tea on her lap, and of course it upsets her that she has spilled. Cold drinks present no such problem, being drunk through a straw, but even if I could keep the tea cool enough to drink with a straw, it is not really the full 'tea' experience anymore.

One minor compensation is that I will no longer have to deal with the problem of Aunt Evie. Whenever I would offer Mom a cup of tea, she would inevitably pause half way to her first sip and say, "but you haven't gotten any tea for Evie!" There would follow several minutes of frantic cup chasing as Mom would say, "Here Evie, take my cup!" and reach out to place the cup in Evie's hands, which did not, as it happen, extend into this world. I was generally able to intercept the cup before it crashed to the floor/spilled over Mom's legs, but this would often engender some conflict as Mom would demand to know "what are you playing at?" trying to grab away the cup of tea she was offering her sister. And it became quite clear over the months that while there is a good supply of buns and scones on the other side, it is apparently impossible to get a really good cup of tea. (In this context, the Red Rose ad campaign, "only in Canada, eh?" takes on an entirely new dimension.) I have the strong impression that Evie, although quite happy with 'life' over there, would dearly like a cup of tea and a cigarette. Asking my Mom or I for a cigarette is a lost cause, but she does seem to feel the prospects for a cup of tea worth pursing. I have not yet worked out the theological implications of all this.
Posted by Robert Runté at Wednesday, July 15, 2009