Having done the Queen Mary, I moved across the street to the Carnival Cruise Line's port and boarded the Paradise for a four day cruise. The decor of the Paradise is pretty gaudy (especially in contrast to the magnificent taste of the Queen Mary), the entertainment painfully-excessive patriotic American musical tributes, and the passengers mostly out for a four-day drunken 'lost weekend', so not at all my crowd.

But the food was good and I was only interested in the cheap cabin and the chance to write. Indeed, I didn't even bother to disembark at either of the ports visited.
I mostly stuck to my cabin, emerging only for meals or to give the steward the opportunity to clean. I had brought my Neo2 with me, a wonderful portable writing tool, so would go to the library or an unoccupied corner to continue writing pretty much nonstop.

(The library on the Paradise is as tacky as the rest of the ship, with only a fraction of the bookcases of, say, NCL's Pride of America, and even half of that was given over to the storage of games or hymnals. The four tiny bookcases left for actual books contained nothing but trash -- the best I could find were two books by J.D. Robb and a Stuart Woods -- not exactly heavy-hitting literature. Clearly, "beach read" would be too challenging for the typical Paradise patron, interested only in gambling and duty free liquor.)

Unfortunately, I was mostly blocked. Under considerable pressure to put my retreat to good use, I ground away on the next chapter but without making much progress. The truth is, I had already written everything covered in my outline except for the final two scenes, but still have about 25,000 words of action between here and the end to fill in. Normally that wouldn't be a problem: I just start writing and see what happens. But I had stopped on a slightly complicated bit of business where the characters have to talk through who is going to trust whom, and I just kept getting bogged down in the problem that the basic premise of my hero winning over the others is completely ludicrous. Well, okay, that's largely the point of the novel, but there is only so much clever dialog a reader can wade through before somebody has to shoot somebody for the action to keep moving, and it just wasn't coming together for me. I'd try to speed things up and have one or other character cut through the chaff and say something to move things forward, but they kept balking and telling me they wouldn't say that until this or that condition had been met, which I couldn't get to without another 20 pages of dialog that was frankly beginning to bore even me.

Long experience has taught me that writer's block is largely a question of momentum, so rather than stare blankly at the keyboard, the trick is to get the juices flowing by writing something. (See anything by Natlie Goldberg for details on the technique.) So I switched to a short story I had wanted to submit to Tess14, though the deadline for that had already expired, but that wouldn't come either. So, I went further down the writing ladder to 'editor mode' and began work on a nonfiction manuscript that had been sitting on my desk, nagging me, for a month. That seemed to work, and I was able to bang through that in about a day (freeing up a day or two of writing time from my post-retreat schedule). Feeling better having accomplished something I turned again to the short story, and that started coming. As I got a bit of the story working, I switched back to the novel and made a bit of progress, though nothing like I had hoped. (But then, I always set unrealistic expectations for myself....) By the end of the cruise I still hadn't dug myself out of the corner I had written myself into, but I was starting to see a couple of possibilities -- when in doubt, you can always blow something up, and I had a couple of characters waiting in the wings I could drop in on the conversation prematurely....I just had to decide which one because each would take the story in very different directions.

Getting off the Paradise, I went to the Sheraton across the street from LAX for the day, wasted time bogging and emailing (Internet time on a cruise ship is too expensive for much of either of those) but did make some progress on the short story. Next day took off for Missoula, where I spent the night awaiting the bus to White Fish. Once again, the Neo2 came in very handy as I kept writing non-stop. 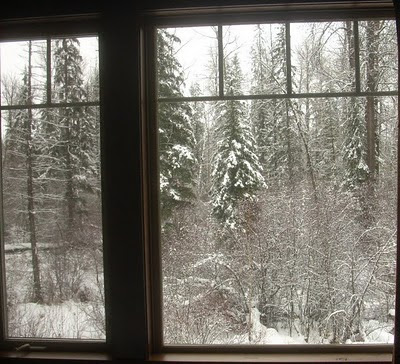 The view at the Lodge at Whitefish Lake

Mary booked me into the Lodge at Whitefish Lake, which was very nice indeed. The room they gave me was fabulous, with a spectacular view of the forest, and the dinning room was superb. We will definitely be returning there. Sitting with the Neo2 on my lap, looking out at that view was perhaps the most productive portion of the retreat, though it is fairly typical that I hit my most productive at the exact moment the retreat is over. Though in this case, I actually had the train from Whitefish to Shelby to go and was able to edit the first draft of the short story. The train back was even better than the first trip because of course during the day I had the benefit of the spectacular mountain views I hadn't been able to see going the other way. And the dinning car had real china this time.

So, all in all a successful trip, even though I did not complete my novel. The key, I hope, is that I was able to reconnect with the novel (I always re-read and re-edit what I have so far, before starting the next bit) which keeps the project alive. I have several colleagues who have half-finished manuscripts in their drawers, some as long as 100,000 words, that they just lost momentum on and stopped. I used to think that was crazy, but I'm starting to understand that a bit better now that mine has dragged on over three years with no end in sight, and with dozens of other writing projects jockeying for my attention. But devoting the week to the novel was enough to refocus me on the project, to get the enthusiasm back up, and to get me thinking about the characters whenever I have a moment. I've more or less figured out what happens next and can work on the details in my head until the next opportunity to get it down on paper.

And although I can already see that I will have to rewrite the short story before it can be sent off, I know what I have to do to make it work, so it is just a matter of squeezing a day out of my schedule somewhere to finish that up. I am quite pleased with it because it is entirely different from what I normally write -- it's good to push to the edges of

So, mission accomplished.
Posted by Robert Runté at Wednesday, December 29, 2010