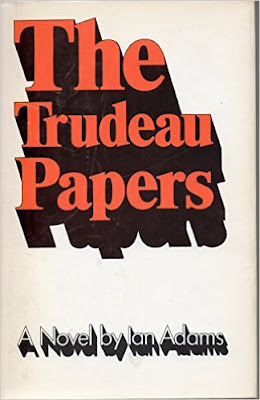 The basic plot was that America had invaded Canada in response to the newly elected NDP government in Ottawa trying to raise the price on Canadian natural resources going to the US, and possibly cutting the US off entirely to meet Canadian demand. The book follows a small band of resistance fighters. Canada as Viet Nam.

The title, our narrator tells us, was a reference to one of Canada's last elected Prime Ministers before the invasion. When the novel came out in 1971, we all assumed the author meant Pierre Elliott Trudeau, and the book was a 'contemporary political thriller'. But clearly, Ian Adams was in fact writing predictive speculative fiction. The title was actually a prescient reference to Justin Trudeau as one of the last elected Canadian PMs. The novel seemed pretty far-fetched in 1971; but with Trump running for President of the US, and American running out of water... Yeah, maybe time to dig out an old copy of the "Trudeau Papers", dust it off, and have another read....