9 Tales of Raffalon by Matthew Hughes 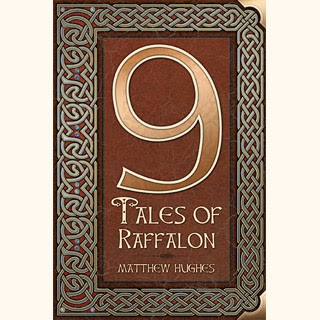 This is my favourite collection of Hughes short stories so far—which is saying something, because his collections have all been quite wonderful. Seven of these stories originally appeared in Fantasy and Science Fiction Magazine (a significant guarantor of quality), one in a Gardner Dozios anthology (likewise, a good sign), and one is original to this volume—and frankly, a new Raffalon story is itself worth the price of admission.

The tales of Raffalon the Thief are not so much about thievery as they are about Raffalon extricating himself from one impossible predicament after another, often revolving around his involuntary involvement with various wizards. The stories in this volume fit together almost seamlessly, the characters or situations carrying over from one to the next, as we follow Raffalon's escapades to a surprisingly satisfying ending in "The Inn of the Seven Blessings". The individual stories are engaging mysteries, heists, or escapes set against Hughes' ongoing universe/magical system, and the characterization of Raffalon is delightfully twisted. Raffalon's ethical deficiencies seem entirely reasonable given the even worse characters against which he is pitted, and an age in which crime has been amusingly bureaucratized through the Guild of Purloiners and Purveyors.

It is, however, the dialog—and more especially, Raffalon's interior reflections—that sets Hughes apart from all others. "Droll" doesn't begin to cover it, because it is not merely witty, but reflects a worldview just completely off kilter. It all makes complete sense in the eccentric universe of Hughes' distant future, but one is left wishing both that people actually talked like that, and profoundly thankful that no one actually thinks that way.

Hughes' brand of dark humour is completely unique. A comparison with Jack Vance is often evoked to describe Hughes' work, but entirely misses that Hughes is often, as here, wincingly funny. I cannot recommend 9 Tales of Raffalon highly enough, to both long time fans and those not yet familiar with this grand master of the genre.

Runté reviews of some other Mathew Hughes books: