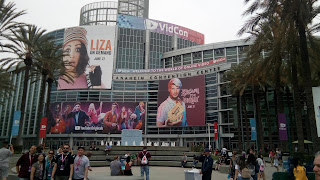 Went to VidCon this year, which was as fascinating as I expected. I was tempted to sign up for the creator or industry tracks, but ended up in the community track so I could take my youngest daughter, Kasia, with me. (I had been debating surprising her with a VidCon trip when she brought Mary and I a video of MatPat's GoH speech at this year's Vidcon Europe and spoke wistfully about someday going to a VidCon herself, so...that happened.)

Taking Kasia turned out to be helpful because she knew way more of the personalities than I did, For example, I had only a vague idea of who SMOSH Games were, but Kasia was totally pumped to have met them. 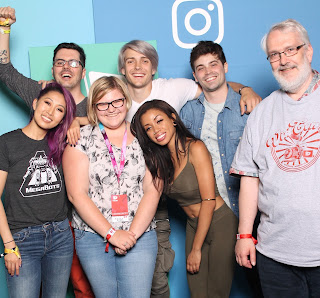 But I know who MatPat is and was honoured to meet him. I told him I thought he had done more to promote critical thinking than any school curriculum, and he told me that from the beginning, he had always intended GameTheory and FilmTheory to promote critical viewing, and that he was trying to pay forward the lessons he had learned from some of the excellent teachers he had had. 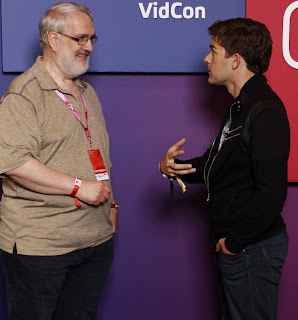 MatPat really impressed me with how caring he was—taking quite a bit of time to talk to Kasia about her depression, for example, and I observed him being equally nice to everyone else, as well. You should watch the embedded video at the top of this post to get an idea of why MatPat is one of the forces of light among YouTubers. 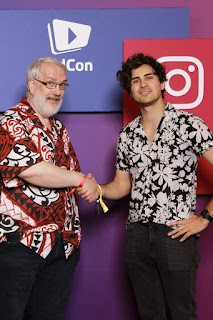 I also got to meet Anthony Padilla, who was again, extremely approachable and caring in his interactions with his fans. Kasia wasn't with me at the time, and when I told Padilla I was teaching in July and that getting to name drop that I had met him would make me seem way cooler to my students than I actually am, he posed me (i.e., physically moved my arm and head etc to get it right) dabbing with him. I frankly had no clue what dabbing was (I have since looked it up, of course) but his photographer and both security people assured me that dabbing was a thing, and that my students would love me for it. (It's possible they were assuming a younger age group.)

So I got that photo and had started off down the hall when Padilla called me back and asked if I could wait for just a minute to be in a video with him. Well, yes, I could possibly manage that. Padilla finishes up with the last of the other fans lined up to meet him, and then has me and two other adults line up as if we were the entire crowd at his meet and greet. We are told to exhibit a general lack of enthusiasm. I do my best to look like I am lost and standing in the wrong line. Padilla then has himself filmed coming out to greet his fans, and finding just the three of us looking past him, like we are confused over who he is and why he is there. "Is this the right line?" Padilla asks the camera, "Is this it?" And then us waving as if we realize he is probably somebody, even if we're not entirely sure who. It's a nice simple bit of self-deprecating humour that Anthony has orchestrated.

Of course, he may not actually use the footage, but I'll edit in the link here if he does.

Unfortunately, in the excitement of being in an Anthony Padilla video, I managed to lose the original photo. Don't know where or when—I searched everywhere I could think of—but such is life. (Being in the video is better!)

[Edited: hayden @kickthehayden found the photos and posted them on Twitter so here's me dabbing with Anthony Padilla: 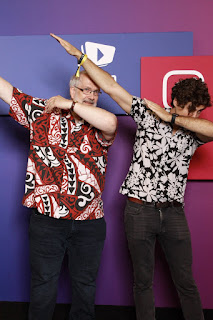 While waiting for the above scene to be filmed, I naturally started a conversation with the security guy, who turned out to be a senior manager just helping out on the floor to get a feel for the operation at ground level. The guy was a former coach, so we talked about the role of the coach in educating adolescents, and it was obvious he would have been a great coach, because he had a lot of the right type of charisma and I liked what I was hearing regarding his views on education. I have to say, Vidcon was one of the best organized and most heavily staffed events I've ever attended, so pretty impressed with that end of things too. Not sure how many people were there, but I'm guessing well over 30,000, so something like that takes a bit more organizing than the SF events I've organized over the years. (See, for example, the disastor of TaraCon, a competing convention the same day, a couple of hotels over.)

In terms of panels, the highlight of Vidcon for me was the "Edutube: Beyond Science" panel. Best thing I've seen at a convention in 30 years: John Green, Dr. Daniel Bainbridge, Betty (Articulations), Cory Arnold, Sarah Urist Green, and A.E. Prevost. Everything the panelists had to say was music to my ears: that the humanities were as important as the sciences; that the barriers between disciplines were artificial and arbitrary; that specializing too early was disastrous for the individual and for society (e.g., having to chose STEM route through school by age 12; STEM graduates having no idea how to write an essay or to express themselves; parents forcing kids into STEM subjects because they believed that's the only realistic route to a career; etc); that the dichotomy that humanities/art=beauty and sciences/engineering= doing was false, and that engineers needed to do beautiful engineering, and mathematicians did high-level math on the basis of how beautiful it was, not by what it could do for you, and so on. The all spoke eloquently for the need for interdisciplinary, cross-boundary education, and that one strength of online edutubers is that they were not restricted by the artificial boundaries imposed by the school system/academia; that there was no one to stop them from drawing on multidisciplinary approaches when they did their programs. John Green, did add the caveat that those educators working through PBSDigital and so on had to at least label their shows as history or art or etc, because otherwise, their potential viewers would not be able to find them. The problem, he said, is that the viewer doesn't know what they want to know until they see it. He gave the example of the Australian vlogger who talked about the evolution of human culture from stone to bronze age, based entirely on the artifacts he had unearthed on his own farm. "I didn't know I needed those videos until I found them, but now I need them very much!" Thus, constrained by the marketing need to do some labelling, Green still spoke to the error of artificial and arbitrary lines drawn between disciplines. 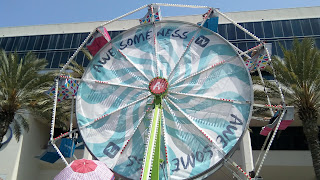 There was even a Ferris Wheel

I was most impressed with Dr. Bainbridge, who was funny or stirring every time she spoke. (My favorite saying now is her, "I don't think of myself as a nerd, but as a niche enthusiast," which resonated with everyone in the audience.) Bainbridge contrasted the sort of interesting social history video bloggers address, and the "names and dates" boring forget-immediately-after-the-test history taught in schools. Instead of history being the record of great men doing deeds, she was interested in the history of those whose voices had been marginalized or ignored; social history, the life and times of the average person; and the history of everything else. She argued that science cannot be understood separate from history because all science is a social construct: how that idea come to dominate (or not) in this or that discipline. She gave the example of "Why do we know that breakfast is the most important meal of the day?" (I happened to know the answer because Terry O'Reilly had covered it in an episode of Under the Influence, but Bainbridge left that hanging as a teaser for her series.) I loved everything she said about teaching, about what the experience of education should be like for students, about the need for liberal arts for STEM students, and on and on. I could listen to her for days, and will now that I know about her series, Origin of Everything.

The others on the panel were very nearly as fascinating. Betty was a museum guide who, discouraged by how many visitors did not know even basic terms like "Modernism" or "Impressionism", started a YouTube show defining general terms, but quickly got into her true love, design and architecture. "People notice bad design, but they never think of good design" so her show is about the history of Exit signs and building codes and answers all those questions you didn't know you had. Articulation came about because Sarah was an archivist stuck in the basement of a museum who never got to talk to the people for whom she was curating exhibits, and now talks to everyone via video. Cory talked about explaining music theory concepts on his channel being watched by a few hundred students looking up that concept when studying for their music theory exams until he was inspired to approach the topic from the other end: take a famous piece of music and analyze it using music theory, when suddenly his videos went viral. Viewers commented, "I always thought the music was about the lyrics...I never realized you could analyze the how the music contributed to the meaning!" And so on. Fantastic panel! 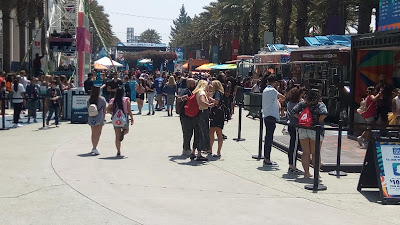 The avenue of food trucks at Vidcon.

The other panel I particularly enjoyed was "Nerding Out: Creators and Fandom" (Andre Meadows) Ricky Dillion, Wes Johnson (SMOSH Games) and Meredith Levine (Fanthropologist). As a sociologist and long-time contributor to SF fandom, I am always interested in how community forms avocational subcultures around various media and personalities. The panelists mostly spoke to the fandoms they were involved in (some great stories!) but did speak a bit about the YouTube community and their sense of their own followers. I was again most impressed by how these creators were concerned to keep their own fandoms positive and their pay-it-forward attitudes. Wes Johnson, for example, spoke about how the cosplay community welcomed and encouraged him as a newcomer and was a safe space for everyone; and then proceded to encourage Rick Dillion to "go for it" when he said I had wanted to cosplay at ComicCon. Although we are all familiar with the few bad apples who exploit YouTube for personal gain at the expense of society and their followers (e.g., Logan Paul), the vast majority of YouTubers are good people. Even self-confessed "professional children" like Wes Johnson are in fact extremely responsible individuals who are at some pains to keep their material and their online followings constructive. 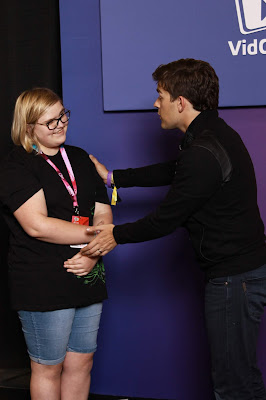