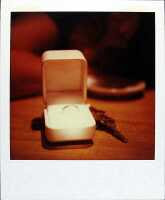 Well, I'm getting on this bandwagon fairly late, but if you haven't already come across Hugh Crawford's and Betsy Reid's website with Jamie Livingstone's photo project, it's worth a look. Livingstone took 1 Polaroid everyday from March 1979 to the day he died, Nov 25, 1997. The thumbnail reprinted here is one of the most reviewed photos: it shows his wedding ring with his bride blurred out in the background, two weeks before he died. Rules for the Polaroid a day project were fairly simple: a day Polaroid a day, every day; one only; no retakes. It was basically Livingstone's diary, each image recalling the day or moment for him years later. But as Chris Higgins, the blogger who broke the story on this, points out, even if you do something very simple, if you keep doing it over and over and over for years, it eventually becomes something very different. Fascinating visual record of a man's life and times.

(And on a completely different level, it is interesting to note how Chris Higgins was able to deconstruct the photos to eventually identify Jamie Livingstone -- the site hadn't originally been intended for the public, and had not identified the photographer or those mounting the photos on the web, but Higgins was able to work it out based on looking at the people and places in the photos, and tracking through Google who was uploading material to the site. Which just goes to show that, given sufficient entries, there is no such thing as an anonymous blog.)