It takes six weeks to get there. 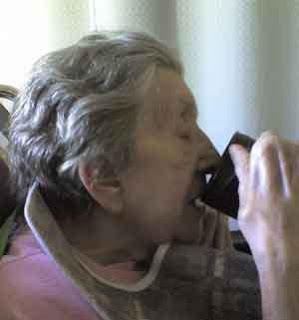 Another brief trip to Edmonton to feed mom. Of interest here was that Douglas has now joined the circle of deceased relatives sitting with her.

We haven't told mom about Doug -- there is no point since she wouldn't be able to remember for more than a few minutes, and we and the majority of the staff at the home felt it would just be cruel. (One staff member and one neighbour thought we ought to tell her, but they seemed to be projecting their own 'need to know' onto Mom.) The first few days Mom asked after Douglas, and I would just reply that he wasn't here today, that I had come instead. After that Douglas became confused in her mind with her long dead brothers, especially Tom, when talking to me; or she would say her "son was coming" to the staff, and they'd simply answer in terms of when I would be there next. But suddenly this week, for the first time, she was including Doug in her conversation with those from beyond the veil. As in: "Evie, why don't you have another cup of tea? Douglas, get Evie some tea, will you?" And clearly not addressing me, but the unseen individuals on the other side (in both senses of the phrase) of her.

Not sure how I should interpret this, but it does make one wonder. If there is something after, and if one retains volition, then Douglas would certainly want to sit with Mom. As before, it's something of a comfort knowing that Doug is there for Mom when I cannot be.
Posted by Robert Runté at Monday, June 02, 2008