Shakespeare and Edmonton School of Ballet

Having to spend much of the summer in Edmonton to take care of my mother and to attend to my brother’s estate, we tried to make the best of it by registering the girls in appropriate summer camps.

The first was Tigana's participation in the Free Will Players "Shakespeare in the Park" week-long, half-day camp. It was well done and we appreciated the attempt to introduce Shakespeare to youngsters. The theme of this year's camp was "Shakespeare's Clowns", with the children doing bits from "As You Like It" (probably a good choice, since the other play they were doing was Richard III.) We all enjoyed attending the matinee performance of As You Like It, which was very well done; I was disappointed by the low turn out for this excellent production, but am told matinees are often sparsely attended but that night time audiences were quite satisfactory.

The second was the Edmonton School of Ballet's intensive summer camps. These ran for two weeks, culminating in a performance at the Meyer Horowitz Theater. This camp was entirely remarkable, a fabulous experience for both Tigana and Kasia.

I was first struck by the amazing facilities of the Edmonton School of Ballet. Here was an entire wing of a public school given over to studio after studio specially built for dance! You know, the kind of thing you usually only see in movies with the mirrored walls and floor mounted bars the dancers hold onto and the glass wall so you can watch the class from outside. It's like something I might expect to find in cities like New York or Toronto. I had no idea that such a facility existed in Edmonton.

Second, I was struck by the very high quality of instructors. Sitting around in the parent's area awaiting Tigana or Kasia to complete their lessons, I had many hours to observe the other classes in operation -- especially those in the classroom with the glass wall. As an Education prof, I have some idea of good and bad teaching when I see it, and I was astounded by the procession of remarkable teachers I was able to observe. They all had completely different styles, but they all appeared to be incredibly passionate about dance, about helping each student reach their fullest potential, and about providing a very positive learning enviornment, while holding students to a very high standard. I was extremely impressed, and wished I could have bottled it to show my student teachers.

Third, I was astounded by the very rapid pace at which students improved. I literally watched one instructor take a class of girls in the intermediate/advanced class from crashing into each other the first day to a fully professional performance at the conclusion of the two weeks. It was like watching rehearsal for a CBC production rather than watching a ballet class. I'm unclear whether the remarkable pace of development is a result of superior recruits, superior instruction, or simply the structure of the intensive two week experience that allowed for these students to achieve such heights in such a brief period, but it was very exciting to watch!

Fourth, and this has to be said, there was absolutely no comparison between the final performances at the Meyer Horowitz theater, and the parallel performance by the dance school to which we had sent Tigana in Lethbridge a couple of months earlier. We had been satisfied with Tigana's class in Lethbridge, but the performance by other classes --especially the ballet classes -- had struck us as the wrong sort of advertising -- they were so weak, we were left wondering if Tigana shouldn't take swimming next year instead. But the performance by the Edmonton School of Ballet was fantastic -- many of the classes put on productions I would not have hesitated to air on CBC.

Three things struck me about this performance:

First, the choice of music and the choreography were inspired. Instead of the usual "Rite of Spring" sort of rubbish, where one doesn't really know what the dancers are supposed to represent, these were magnificent numbers with humor or social commentary or beauty and grace. Instead of drumming my figures impatiently waiting for my kids' turn on stage, I was spellbound the entire show. This was inventive and expressive and what dance is all about!

Second, unlike our frequent experience in Southern Alberta, there was no attempt to sexualize the costumes. (THE COSTUMES! Did I mention the costumes! Holly mackerel The production values were better than the CBC -- well, these days anyway -- and they managed to put it all together in just two weeks! Astounding!) I am so tired of seeing 8 year olds dressed up in miniskirts and top hats like some mini Vagus show girls and paraded around as apprentice sex objects. Give me a break! But there was none of that here. The dancers were costumed, choreographed and directed in what I viewed as age appropriate but empowering ways -- I was struck particularly by a couple of numbers where there was a range of ages, how the 'senior' young women were able to produce smoldering performances right next to younger "peers" identically costumed, dancing the same steps, but somehow staying chastely unaware of any suggestive overtones. One could not help but feel that the dancers were expressing exactly as much of themselves as they were comfortable with, and thereby taking control over their bodies and lives in a way that was very different then when six year olds are turned into chorus girls.

Third, the standards achieved in choreography, both at the level of individual expression and group synchronization, were astounding. Indeed, one of the very impressive features of the choreography was how the same class was able to demonstrate both advanced and intermediate levels -- the advanced dancers taking a few extra steps to reach that little bit higher without ever upstaging the intermediate students. Indeed the mixture of levels in the same class allowed for much greater flexibility in the overall choreography as everyone was pushed to their limits and yet given equally meaningful parts to perform. At no time did I feel that any one dancer was upstaging the others, or that anyone was being held back.

And there were some stunning performances. As Mary put it, we'll see one of the male dancers on "So you think you can dance" in two years when he is old enough to qualify because that young man has definitely got a career in dancing! And there were similarly two or three of the women who are as good as any I've ever seen. 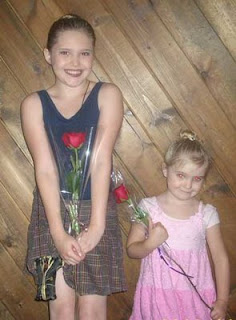 Tigana and Kasia following their performances at Edmonton School of Ballet.

Anyway, we registered Kasia in beginning ballet class for 3 and 4 year olds and Tigana in both Ballet and Jazz. Ballet does not come naturally to our Kasia (she is, in a word, terrible) and we have no particular commitment to her learning to dance, but she loves it beyond reason, so what the hey. As we had hoped, she had a blast in class, and performed well enough on stage (in front of a very large and no doubt intimidating audience), but I don't see a career in ballet any time soon.

[Sept Postscript: On the other hand, watching (as apparently all little girls do) "So You Think You Can Dance" on CTV, Kasia has since demonstrated an unsuspected natural talent for jazz and hiphop dancing. Who would have thunk it? But no one offers Jazz dance for four year olds, so she may have to wait a bit.]

Tigana, on the other hand, made excellent progress in both her classes. She was at least as good as any of the other kids her age, and in my admittedly biased view, was better even than many of the older kids in her class. What Tigana lacks in technical skill -- having lacked some of the pre-requisite classes in Lethbridge -- made up for it with more expression and spontaneity in her performance, undoubtedly strengths acquired through her involvement with theater.

So, whatever else happened this summer, I cannot emphasize enough how impressed I was with the success of these intensive two week camps.