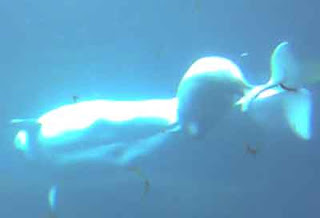 I took Kasia to the Vancouver Aquarium to see the new baby beluga whale. Well, actually I was hoping to show her the whole aquarium, as we had with Tigana at this age, but somebody must have prepped her that the big thing at the aquarium was the new baby whale, so that's what she wanted to see, and she dragged me through the other exhibits at breakneck speed to get to the baby beluga. We had to stand in line for about 25 minutes, which wasn't too bad from my point of view though pretty much at Kasia's limit. When we finally got in, we received an orientation that I found interesting, and at which Kasia put up her hand and asked "What's the baby's name?" (They hadn't named her yet.) The orientation warned us that the baby was spending a lot of her time in an adjacent pool because the mother and grandmother whales were trying to teach the baby that the neighbouring pool was safe, even though there was only one entrance. So we went through to the viewing room, and sure enough, the whales were barely visible swimming in and out of the neighbouring pool. But with 30 seconds on our turn to go, they finally swam directly in front of our window, and to my surprise, this was sufficient to satisfy Kasia. Who immediately bought mommy and baby beluga whale stuffies, which the aquarium staff had conveniently set up in a large display near the whale exhibit exit. Kasia then headed straight out the door -- apparently, having seen the whales, we were done! 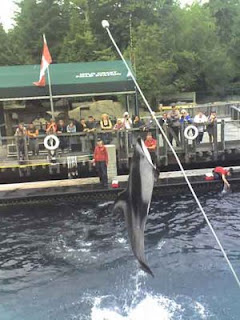 I did manage to see and snap a couple of shots of a dolphin rehearsal on our way out. 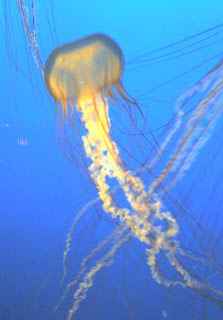 And an okay picture of a jellyfish.
Posted by Robert Runté at Friday, August 22, 2008