Given that Mary has study leave this term, and I was able to schedule some curriculum development in Florida mid-November, we took two weeks off to go down to Orlando.

This was also Kasia's fifth birthday, and we had taken Tigana to Disneyland for her fifth birthday, so we wanted something similar for Kasia. I was concerned that we would not be able to really match that original trip, because we hadn't had to line up for anything there (Mary having been a wheel chair at the time -- okay, less magical memories for her maybe, but Tigana and I loved that we could skip the lineups since the handicap entrance was seldom busy, especially in the off season when we had gone) and because my friend Adrian (who had worked for Disney at the time) had been able to score free passes for us, some very fine seats for shows, upgraded hotel accommodation, and so on. Going back to Disneyland, or even going to Disney World, as normal walkins was likely to be disappointing by comparison to the VIP treatment of that original holiday. I really couldn't see Kasia waiting patiently in line for six hours just to get an autograph from Snow White. So after some research, and given our recent happy experiences with cruising, we decided to try a trip to the Caribbean on the Disney Cruise line, leaving from Orlando. This offered us appropriate holiday locales, Disney-style activities (and free babysitting) for the kids, and five star dining for the adults. What's not to like?

We drove up to Calgary to catch the red-eye to Orlando, then drove to Coco Beach, where we acclimatized on the beach for a couple of days before boarding ship. (It had started snowing on our drive up to Calgary, so racing the waves down the beach was a big improvement.) 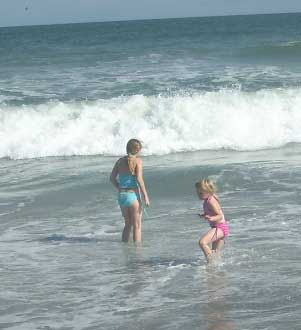 When we returned to Orlando to board the Disney Magic (a singularly efficient process), we discovered that Mary's meticulously researched trip was off, and the Magic was now going to Mexico. So the bad news was that all her shore excursions were cancelled, and we hadn't any idea of what to do or plan for the shore days on this itinerary, but the good news is, we weren't going into a hurricane. So on balance, that was for the good. The whole point of booking a cruise instead of an all inclusive resort in hurricane season is that if one does show up, you aren't stuck with horrible dangerous weather. Your "resort" just moves somewhere else.

So Mary scrambled to book new excursions, and I suddenly found myself scheduled to trek through a couple of major Mayan ruins. Which is, I have to say, no bad thing. Though had I known, I probably would have read up more on them so as to be a better source for Tigana. But then, that's what local guides are for, and we had a couple of really excellent ones. (One woman was so good, she even provided "footnotes" to her talk and Q&A, citing specific researchers and articles, which is music to our academic sensibilities).
Posted by Robert Runté at Tuesday, December 02, 2008