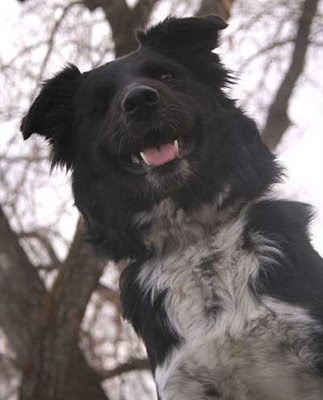 
We've been debating getting a dog ever since Pooka passed away in November, but have had a hard time believing we could ever get an animal as special as he was. But as it has become increasingly clear that the kids needed a dog in their lives, asap, so Mary has been tracking via their websites all the dogs that have come into various local shelters. (Mary wanted a "rescue' dog to partially pay back to dogdom how much our family had received from Pooka.) Several dogs seemed like possibilities but hadn't panned out for one reason or another -- one turned out to be fostered in Michigan, too far for us to meet; another couple were adopted before we found out about them; Mary took the kids to meet a very likely candidate, but Mary and Kasia suddenly started sneezing, which seemed like a bad sign; another was taken off the rescue market because the foster mom couldn't give the dog up. We tended to be fairly fatalistic about these developments, since we believed that we would get the dog that we were destined to have. 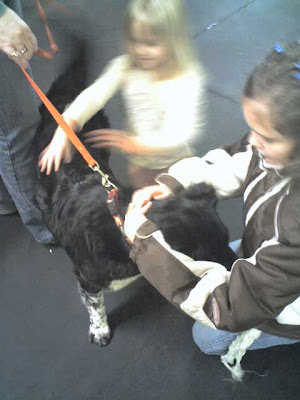 Tigana and Kasia head straight for what turned out to be the favorite dog of the shelter's adoption fair.


Jackie hit our radar early on, and her story certainly touched our hearts. When we saw that she would be at the pet adoption fair this weekend, we decided to meet her. I was pleased that the kids would be seeing her within the context of 20-30 other dogs, so that it wouldn't just be a matter of falling in love with the first dog they happened to meet. But I needn't have worried. As much as we were drawn to several dogs, the moment the kids set eyes on Jackie, that was that. 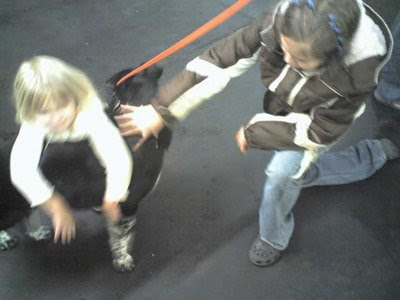 Kasia throws herself over Jackie to "protect her" from another potential adoption family.

I had to explain to the kids that there was an adoption process and that we were only one of several (many, as it subsequently developed) families interested in Jackie, so that even though we were filling in the application forms, there was no guarantee that we would be the family to get her. I tried to get them to make a second choice just in case, but they were both reluctant to do so, already fixated on Jackie. I tried to keep their expectations low as we went for lunch, and we agreed that if we didn't get Jackie, we hoped that she would at least go to the nice lady in the yellow coat. But I forgot that my daughter lives a charmed life in which she is denied nothing (except possibly, humility) and sure enough, we were the lucky family to be chosen for Jackie.

I had some trepidation making a decision of this magnitude without Mary (she was away at a conference) even though she had already read all about Jackie and specifically approved our getting her, but I quickly came to realize that we had just won the lottery dogwise. Quite aside from the kid's instant bonding to her, everywhere I went for the next two days, everyone has told me what a fabulous dog I had gotten. For example, when I went to the pet store to collect supplies, the clerk overhead the kids mention Jackie's name and she and the other clerks instantly gathered round saying, "You got Jackie?! You are solucky. She is a great dog!" When the volunteer who ran the raffle phoned to say I'd won a prize, she asked which dog I'd gotten, and when I said "Jackie" she squealed and said, "Wow, you really did hit the jackpot!" and told me the foster mom had spent the next four hours crying over having to give Jackie up. And so on. It seemed like everyone knew and loved this dog.

I'm beginning to see why. She is clearly intelligent and sensitive (quickly running over to help Kasia when she hurt herself) and gentle. She is a sweet, sweet dog.

But there may be a brief adjustment period. Having had 12lb Shih Tzu-Maltese cross for the past 18 years, our new mid-size Border Collie cross seems huge by comparison. For example, I found myself this morning out on our walk holding the regular plastic sandwich bag that we have used for the last 18 years to clean up after our dogs, staring at a pile of manure the size of my head. Oops. Time to recalibrate bag size. And whereas I often had to watch where I stepped in the house lest I trod on tiny Pooka or Portia, I now find myself with the opposite problem -- that there is no space in the kitchen not somehow full of reclining collie. And how are we going to get this fifth passenger into our four passenger Honda Fit, once Mary returns? Explaining to Jackie that she couldn't drive the car and had to sit in the passenger seat involved a fairly lengthy negotiation, vs when we would just pick Pooka up and hold him until we could clear a suitable space into which to place him. One does not lift Jackie, and when she sat down in one of our chairs, she didn't seem to notice that Kasia was already occupying said chair. All Tigana and I could see was this tiny arm waving from underneath the dog, signaling an urgent need for air.

But it's all good. She's not really that big, and our perceptions will adjust quickly. We've already recognized that Jackie putting her head in a lap is the exact weight and emotional equivalent of Pooka cuddling up there, so, so what if there is another 40 pounds of dog overflowing onto the floor? The better to keep the girls safe once they are old enough for Jackie to walk them on their own.

Email ThisBlogThis!Share to TwitterShare to FacebookShare to Pinterest
Labels: Jackie