Finally connected with client over editing job, and manager apologized nicely for screwing up, but apparently had emailed me at the wrong address, and assigned the work elsewhere when I hadn't replied. Why the manager hadn't tried, oh I don't know, phoning me at the contact numbers they'd insisted on when she hadn't heard back, or why they hadn't responded to my correctly addressed emails to them is less clear. "Oh, we never got those emails!" The whole conversation has the same feel as when students insist that they have submitted their assignments on time, it must have gotten lost in email/ Moodle/ WebCT/ their dog somehow.... But whatever: it was pro bono work, and I'd much rather be working on other stuff during my retreat.

So actually go out and about in San Diego. The Westgate, where I'm staying, is on the edge of the Gaslight district, so walked around there for a couple of hours. Yesterday was pouring rain, nasty wind, too cold to walk very far, so I just went to downtown mall for some take away. Today was way better. Intermittent rain, but then really great sun when the clouds open up. Had the drinking chocolate at Ghirardelli's. Bought a few things for the kids at World Market. Enjoyed the architecture of San Diego (nice looking convention centre! Some nice towers. Even some of the smaller buildings colourfully painted etc.) 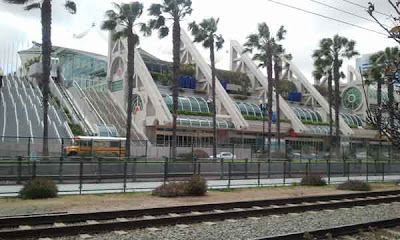 Above: Convention Center; below, just some colour 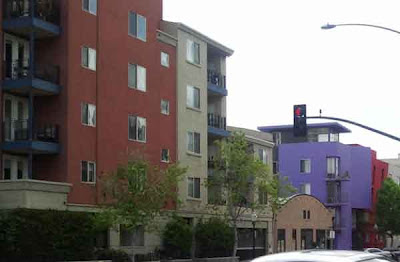 Thing that makes the strongest impression on me, however, are the number of homeless on the streets here. I count an average of three per block. I'm only approached by pan handlers a couple of times, and they're carefully low key, polite even, but every few yards there's someone sitting with a shopping cart, three to five large green garbage bags of possessions, and a resigned expression. In two cases, its families. And everybody else just walks by as if this is perfectly normal. I can't understand how average American can feel secure when so many of those around them are so obviously in desperate straits, though the other subliminal presence were armies of guys with "security" on the back of their jackets. One particular image burned into my brain is of an obviously homeless guy leaning against a parking meters, watching at a group of yuppies -- their clothes and smart phones and expensive sun glasses pushed back into their hair said 'brokers' or 'software moguls' to me -- yakking away in an sidewalk open air bar. The way he was starring at them -- though they were completely oblivious of him, three feet away -- I could see him thinking, "that's who I was four years ago". And I look back at the yuppies and think, one mis-step and it is a long way down....

No wonder the 'haves' are so focused on getting more. San Diego is a nice place to visit, but I don't think I could live somewhere where it is so literally every man for himself.

And all those guns.

Back to the hotel for productive day on various writing projects. Make excellent progress on my day-job Report. In between working on different sections of report, start negotiating a three book deal for Five Rivers while I still have reliable internet access. Author seems open to it. Another coup for Five Rivers, I think.

Work until supper time, eat at The Bandar. Unbelievably big portions, three times the size of anything ever served in equivalent Canadian restaurant. Again, can't help but think of homeless outside, conspicuous consumption inside. But would highly recommend Bandar to anyone who likes middle Eastern food. Superb meal. Had to wonder, though, how many of the customers realize that "Persian" means "Iranian"? (Aside from that group over at the next table who are themselves clearly Iranian and therefore, you know, potential terrorists. :-) Another productive writing session after supper. Things are starting to come together!