Day 9 Ship docked in Port Angeles, Washington, which I had never heard of before. Apparently a logging town, now diversified into ship building and ship repair. Town has less than 20,000 people, so arrival of Oosterdam raised the population by 10%; doubled the skyline. The town was deliriously happy to have cruise ship in town: a host of volunteers served as greeters at the port and were scattered along the town’s two main streets to direct tourists. A fleet of shuttle buses, obviously commandeered from a twenty-mile radius (i.e., had the names of retirement homes and the like, rather than tour companies, on the sides) ran Holland American’s aging passengers the three hundred yards downtown for a mere $7. (If I were the median age of a Holland American passenger, that might strike me as a fine deal, but after three days of cruise food, I definitely needed the six-minute walk.) Another manifestation of the significance to the town of the Oosterdam coverage in the local daily paper: 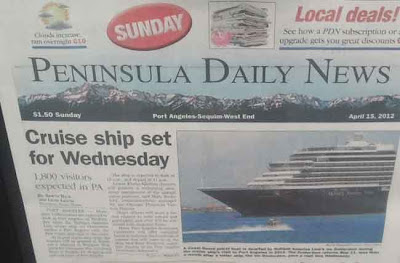 The town was so small…it didn’t have a Starbucks.

But for all that, it wasn’t a half bad place to walk around. Two bookstores, a half dozen antique shops, and a nice used-clothes/coffee shop (Clothier Coffee) with excellent cookies and free customer Internet. I had followed a girl on stilts to the coffee shop when she said the magic words “free internet” to a crowd of Cruise passengers a few blocks from the store. It’s amazing how much email can accumulate in just three days off line. I downloaded, answered key business emails, uploaded previous day’s blog posts, and continued my tour. I hiked a fair way listening to “Wait, Wait, Don’t Tell Me” on my iPod, so probably startled a few locals by laughing out loud for no obvious (to them) reason. Pretty sure insulted antique store owner by laughing uproariously as I fingered her merchandize, but episode with Neil Gaimen is one of the funnier ones. 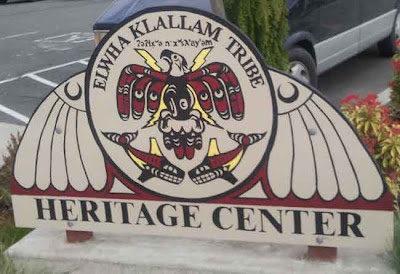 Highlight of Port Angeles for me was the Lower Elwha Klallan Tribe’s cultural Center. Not only is it a visually striking structure, but when I complimented the manager on the architecture, she told me it used to be a tire store. Mindboggling to me that they could take an old eyesore like a dilapidated tire store and turn it into such a striking and vital community center. Some visionary leadership in that group, obviously. 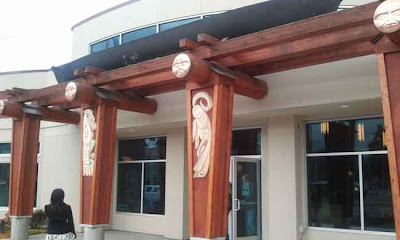 The 'before' picture of the former Tire Shop transformed into the Center. (photo of a photo, so sorry about the poor quality & reflections)

Found out later they had also led the lobbying for largest dam removal in the world, to restore the Lower Klwha river. Unbelievable leadership for such a tiny nation! Inside they had tribal dancers/singers (rather good, I thought—I’ve always preferred West Coast tribal songs/drumming to plains culture) and a fabulous gift shop. 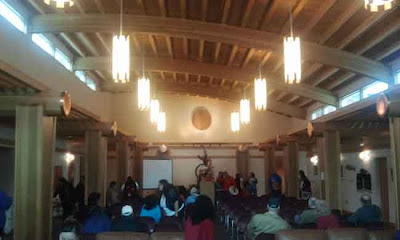 I found I couldn’t buy anything, though, because the majority of items said “made in Canada”, which kind of defeats the purpose, eh? But the Kallan in the Lower Elwha number less than a thousand, so lack the critical mass to have their own merchandise. Still, well worth the visit. I was bit saddened to see how few Cruisers had stopped inside. The Center had obviously gone to a lot of work to mount a series of activities and a fairly elaborate sideboard of appetizers (couple of whole salmon for starters!) for Cruisers, but I don’t think that the cultural center was one of the five stops for the shuttles, and that was a long climb up an almost hill for the average 80 year old, so not many of them had made it there.

And unlike San Diego, there was only one homeless guy lying in the street. (Or, I don’t know, maybe they tidied up for the Cruisers…though it seemed a more laid back community than some.)

Returned to ship, had a nice dinner, finished my report around midnight. Off the ship in Vancouver tomorrow morning around 7:00 AM