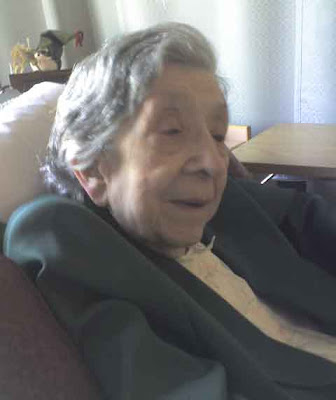 With the passing of my brother, Doug, the care and feeding of our mother has fallen to me.

Doug went to the nursing home every day, summer and winter, blizzard or rain, to feed mother supper. He only missed four days in four years, right up until he fell ill himself. Blind and with no memory, she could neither see her supper nor remember it was there without his patiently spooning it out for her. Mother was always a slow eater, and now at 99, it routinely takes three hours to get her supper in. Her meals are all pureed, but she still has to compulsively chew each mouthful to liquid. There are frequent pauses to reheat the current course in the microwave, since the meal obviously gets cold over three hours, and reheating the food significantly increases not only her enjoyment of the meal, but also the chances of her actually eating. It all looks like baby food to me, but it is clear from looking at the trays of the other residents, most of whom do not require pureeing, that the food here is excellent; far superior to hospital food, with much less repetition in the offerings. With only three or four exceptions in four years, she has always raved about the soup; she expresses similar enthusiasm for the entrée about one day in three. Mom also loves the strawberry flavour Ensure, a liquid meal substitute, and I have found that by mixing her "Great Shake Plus" protein drink into her tea, I can usually get that in too.

Mom was extremely dependent on Doug; more so even than I think Douglas realized. Before, when I'd come up to visit, I would often go to the nursing home when Douglas wasn't there, to increase the visitor-to-hours-alone ratio for mom, but I quickly discovered that Mom wasn't the same person when Doug wasn't there. Most of the day she would sleep, or daydream, and neither the staff nor I could sustain much interaction with her. As soon as Doug showed up, however, his voice would trigger an instant rally, and she would sit up and engage with him for the duration of his visit. Of course, by definition, Douglas never saw her when he wasn't there. Douglas would talk about her good days or bad days, but the truth is, it was probably good hours and bad days, because she was never really there outside of the brief window of his suppertime visits.

Some evenings she would be lucid and have lively conversations with Doug; other evenings she would be engaged, but very confused; others she would simply sleep through the entire meal, not eating. Doug and I suspected the sleepy or confused days correlated to when she got her pain medicine renewed, but we could hardly begrudge her pain relief. Initially, Mom had more good days than bad, but increasingly Doug reported she was having more bad days than good (and that was Doug's biased sample of the 'good' part of her day, at that.) As mom declined, I eventually gave up trying to visit her when Douglas wasn't there. As even supper times became increasingly problematic, I came to see my role not so much as visiting Mom, as supporting Doug. I'd regale him with my ongoing monolog as he struggled to feed mom, and we'd get a decent visit out of it, whether or not Mom was able to participate. She was usually able to say hello and goodbye to me, but as Doug needed to sit by her good ear to feed her, she often couldn't hear me, and didn't usually remember that I was there, or who I was, without a good deal of prompting from Doug. But of course, the vast majority of days Doug was there on his own.

It must have been incredibly hard on Doug. I don't know how he managed, especially as the percentage of 'bad' days increased. Staff subsequently told me that it was not unusual for him to take until 10PM to feed her supper (which starts at 5). As mom became increasingly confused, it must have been hard to sustain conversation or find rewarding moments. (The worst was a brief period in February when Mom went completely deaf for a couple of weeks -- blind and deaf must have made trying to feed her supper very difficult and frustrating. Fortunately, her hearing partially returned in March.)

Living in Lethbridge, I can't be there every night, of course, but I have managed to get up to Edmonton for a week to ten days at a time. Whenever I'm away from home for a week, I feel guilty throwing all the parenting responsibilities onto Mary, and I miss my wife and kids horribly; but whenever I'm at home in Lethbridge, I feel guilty about abandoning my mom. There really is no way to balance that out, so we just do the best we can. (Mary is content -- and farsighted enough -- to have me role model for our kids that it is sometimes important to put others' needs first; at some point, we will want our daughters to occasionally abandon their husbands and children to come feed us supper...)

I have a great deal of confidence in the nursing home staff, who provide excellent care for my Mom. I think Doug's having been there every evening went a long way towards forging a connection with the staff, and by going up every few weeks, I've managed to maintain that positive relationship. But staff are not family, and my being there seems very important to mom. Not only don't I want her to feel abandoned, but I can provide the three hour meal service and the little touches (like extra cups of tea) that the staff's heavy workloads preclude. I cannot always get her to eat, but my batting average is better than the staff's (just because I have a longer timeframe in which to succeed).
Posted by Robert Runté at Saturday, May 10, 2008