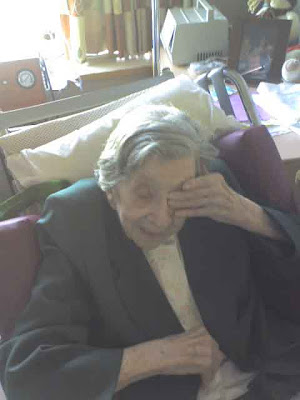 I've been fortunate that most of the days I've been visiting mom have been good days. Once or twice she's known who I am, remembered my daughters and wife, and been able to hold a normal conversation. Most days she's been talkative and upbeat, but 'confused'. A couple of days have been bad, with mom either being too sleepy to eat, or too grumpy.

"Confused" is not really a fair description. The doctor diagnosed "Alzheimer's", but I do not believe that to be entirely accurate. The real problem is that mom has lost her memory, and is blind, an unfortunate combination.

Being blind, Mom has no basis on which to distinguish between dreaming and waking. Ever had that experience of waking up in a hotel or at a relative's and taking a second or two to remember that it's not your own bed? Or just that that was a dream, and now you're awake? Where the rest of us can open our eyes and look around to orient ourselves each morning, Mom has no access to accurate updates. On the contrary, her eyes insist on feeding her false images. (This is apparently fairly common among those who become blind as adults.) For several years, Doug would have to remind her that she was blind, so that whatever she was seeing wasn’t real, and Mom would go, "Oh yes, you're right." Doug would remind her that she was in the nursing home, and she would say, "Oh yes, of course!" And Mom would be able to orient herself back to the real world. As her memory has increasingly failed, however, her ability to recall that she is in a nursing home (which she has never actually seen) or even that she is blind, given that she is 'looking' at something right there right now, has also declined. So she isn't 'confused', so much as reacting to the sensory data available to her, which unfortunately is inaccurate. I am convinced, if mom could only see, she would be reminded of who and what was around her, and consequently lucid much more of the time.

As it is, however, with little to ground her in our world, she spends much of her time in her own. I often arrive to find her in animated conversation with people who aren't there; or when I ask her about her day, she'll tell me about visiting long-dead relatives in cities to which she's never been; or tell me that sitting on the plane all day has been tiring, and ask when do we expect to land? (Well, not an unreasonable question given that she spends the day in a reclining wheelchair, about as comfortable as a typical airline seat.)

Increasingly, Mom spends most of her time in 1948 -- just before or just after her father passed away -- surrounded by her friends and family. She often has tea with her mother as they sit in the kitchen after supper; or with her sister mid-afternoon. Her brothers amuse and help her; various relatives come to visit on a daily basis, especially a contingent from England who seem to be staying with them. These visits are the source of considerable enjoyment for my mother, who seems to revel in the company.

It does create a minor difficulty for me, however, in that I was born in 1951, and therefore do not yet exist in this world. When I tell her that I'm her son and here to visit with her, she looks confused and troubled. "Who did you say you were?" "I'm, Robert, your son."
She shakes her head as if to clear it, and says, "Robert? I don't have a son 'Robert'. My sons are 'Doug' and 'Ron'."

"I only have two sons." And so on. I try to imagine what it is like for her to be sitting having tea in the backyard at her parents' home, and have some complete stranger come in and claim to be the son she hasn't borne yet. Freaky weird.

Even weirder for her is the disorientation that occurs when she falls asleep during dinner. I guess Doug was better at reading the signals, but I can't always tell when she is opening her mouth for the next spoonful, and when her mouth falls open because she's fallen asleep between chews. On one recent memorable occasion, I spooned in a nice dollop of pudding, and Mom shot up in her chair sputtering and crying out.

"What's wrong?" I shouted into her good ear.

"Um, urfph, ack" mom choked out, feeling around for a napkin. When I put it into her hand, she spit the pudding out.

"What's wrong," I asked again. "Did it taste bad? Was there something in it?"

After a moment or two mom calms down and says, "Well, no, I guess there was nothing wrong with it, really. But what was it doing in my mouth?"

"Well, yes, I suppose it was. But what is it doing in my mouth?"

"Why not? It’s desert. It's supper time, and that was desert."

Mom's trademark head shake trying to make sense of what I'm saying. "But I was just getting on the train, and suddenly I had a mouthful of pudding."

She'd fallen asleep, and drifted in to a vivid dream between one mouthful and the next. Okay, again, how weird would that have to be? You're walking along the platform about to board your train, and suddenly and inexplicably, a spoonful of chocolate pudding materializes in your mouth. (Magic realism story idea in there somewhere, for sure.)

On my most recent trip, the problem of not knowing who I am was further compounded by her insistence that I was a woman. Her hearing seems to have lost the lower registers, and with the added difficulty of a slight cold that made my voice more than usually squeaky, she became convinced that she was hearing a woman. Having visualized a woman sitting next to her, it must come as something of a preposterous shock for said woman to then claim to be one's son.

It doesn't bother me. I don't really care whether she knows who I am or where she is, so long as she is happy. Her waking dreams seem to be mostly upbeat -- she often tells me she has had "a wonderful day visiting everyone" or "it's been a nice quiet day with Evie" (her sister). Got to beat sitting alone, blind and aching, in a nursing home.
Posted by Robert Runté at Saturday, May 10, 2008