Pooka, and Kasia Sings the Blues #2 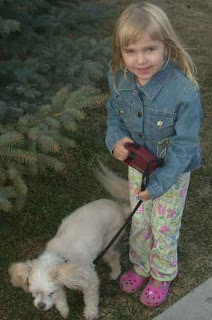 We took our dog, Pooka, to the vet on Friday because he hadn't been eating. The vet ran blood work and confirmed that Pooka had an acute infection, for which she gave us antibiotics, but also told us he was experiencing kidney failure and had the first signs of cancer. She told us if he didn't start eating again normally by Tuesday, we should sit down as a family and have 'the talk'. But we are hopeful that with the antibiotics he will have a while longer with us. The vet conceded that he didn't seem to be in any pain as yet, though he was probably feeling nauseous. But even at 18, Pooka is surprisingly spry, and seems to enjoy that part of his day he is awake, and bounds along more like a puppy than an ancient. But the vet made it clear that the best we could hope for is a couple of months.

Tigana was with us when we got the news, and this time Mom made a point of telling Kasia before Tigana could. (Regular readers will recall that Tigana's discussion of what happened to Portia, our other dog, did not go all that well.) Kasia was initially upset, but seemed somewhat reassured when she understood that he wasn't going to die in the next day or two. Then wandered off to do other things.

With Tigana, we always know what she's thinking and feeling because she provides a constant commentary and exaggerated emotional displays -- Miss Drama Queen all the way. With Kasia, we often have no clue what is going on in there.

Lately Kasia has taken up the harmonica. I didn't even remember we owned one until I heard her playing it one day, but not like you'd expect from a four year old -- no random blowing or even random notes. Actual, well, riffs. Darn if it didn't sound half bad. I subsequently recorded her playing for her Mom for Mother's Day.

Then late Friday evening when no one else was around, Kasia picked up her harmonica and started to play:

and so on for about seven minutes until she noticed me, and then stopped went on to something else.

Now I know what Kasia is thinking, but am left with the larger puzzle. Where does this stuff come from? We never listen to the blues in our house, yet, there it is. Harmonica and all.

Can't help wondering who Kasia was in her last life.
Posted by Robert Runté at Monday, May 19, 2008