Forgot my camera back at the hotel, so don't have any photos of this one*, but pretty amazing mass book launch. Augusta House turned out to be a smokey, beat-style nightclub, complete with Helen Marshall costumed as a cigarette girl from the 50's, but with a tray of Chizine books rather than smokes: an appropriately sleazy /self-satiric atmosphere for the tone of Chizine's generally disturbing readings.

First half of the evening, I got to speak with Allan Weiss again and in greater detail about his current research — definitely fascinating stuff! Met a couple of up and coming writers, notably Kevin Nunn, who has a story in the recently released Evolve anthology. I was fascinated by how Nunn's theoretical knowledge of / experience in improvisational theatre informs his writing: full bore on first draft writing which he characterized as 'beating words into shape with bricks'. Also talked to a writer from Quill and Quire briefly, before the main event, consisting of three sets of three readings each.

I was already familiar with the work of a couple of the authors (e.g., David Nickle), but most were new to me, and the readings made me want to seek out their books in spite of my earlier assumption from the backcover blurbs that they would likely not be to my taste. I was particularly surprised by Gord Zajac's Major Karnage, the lead character's name being such an obvious gag as to initially turn me off, but his reading was terrific, and the passage read out really works. Tony Burgess reading (from People Live Still in Cashtown Corners) was also a revelation, as I am generally not a fan of horror, though I trust Chizine's tastes more than most. But what he read out was brilliant, enough for me to recommend the book essentially sight unseen. Halli Villegas reading from The Hair Wreath & Other Stories was similarly engaging. Robert Boyczuk was amusing discussing reviews of Nexus: Ascension; In the Mean Time Paul Tremblay and Sarah Court by Craig Davidson also seem worth a look.

Chizine (which I discovered I had been pronouncing incorrectly, with a hard 'chi') is definitely putting out some very interesting titles and stands as a model for small press publishing. Sandra and Brett have pulled together an astounding synergistic team:So much talent, so much productivity, in so short a span.

[*28/11/10: I didn't think I got a photo, because my cellphone camera shot just came out as a black smudge, but have since discovered that I could mess with various adjustments (something called 'gamma'?) to get an almost recognizable shot of the audience...gives a sense of the scene, at least] 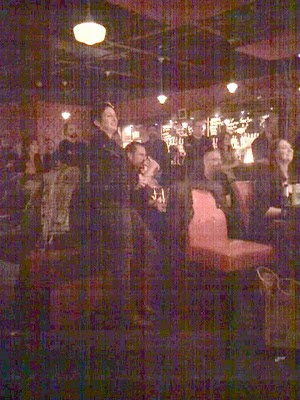