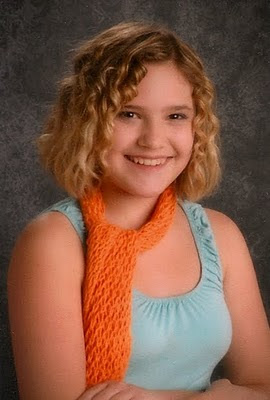 I think the photographic evidence is clear: We are no longer dealing with an elementary child, here, but have definitely moved into official 'teenager' territory. In Lethbridge, middle school now starts in Grade 6, but I still think of Grade 7 as the start of Jr. High and the teenage years, and looking at the differences between this year's school photo and last year's, I still think I'm right.

Tigana's an amazing kid on so many levels, and still appears to like us more than not. Driving her to school this morning, I looked at the kids getting out of the other cars, and I could not help noticing the grumpy expressions and hostile body language on almost all of the kids. Okay, granted that 8:30 AM is not exactly my best moment of my day either, and granted parents are dropping kids off at school, not riding lessons or a rock concert, but at some level, it can't be a coincidence that all of Tigana's peers look like they have just had a drawn out screaming match with their parents. The pattern is clearly 'teenagerism' and I have to acknowledge that it takes a special kind of teacher to be successful in Middle school. Which is not to say Tigana doesn't occasionally/randomly, explode at us, but for the most part, she is happily bouncing off the walls, manic over whatever her obsession of the moment happens to be. The only time she sits (relatively) still is when she is reading -- which is every second we haven't pried the book out of her fingers at, say, the dinner table or swimming. But pulling the book out of her hands is like launching a kangaroo into the room-- boing, boing boing. But the way I see it, unbounded enthusaism beats sullen teen every time!